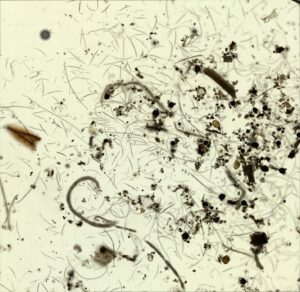 Parasitic nematodes cause $125 billion in agricultural damage around the world each year, but University of Florida scientists hope to alleviate some of that destruction.

To do so, UF researchers will use artificial intelligence to try to more rapidly identify nematodes. Some nematodes live in the ground and harm plants, while others are beneficial, so it is important to distinguish which ones are which, said Peter DiGennaro, a UF Institute of Food and Agricultural Sciences assistant professor of entomology and nematology.

The research, led by DiGennaro and Alina Zare, is among 20 projects to get $50,000 each last year through the UF Artificial Intelligence Research Catalyst Fund. Zare is a professor in the Herbert Wertheim College of Engineering and director of UF’s Machine Learning and Sensing Lab. She and DiGenarro want to use AI technology to aid farmers in their battle against nematodes.

“We have the AI algorithms already developed but not for this issue,” Zare said. “We will need to apply them to the nematode imagery and further develop and validate the algorithm for this issue.”

Need for a speedy nematode ID

Growers need a quick way to identify plant parasitic nematodes in their soil to decide on a course of treatment, DiGennaro said. Artificial intelligence might help with this initial diagnosis of the nematode, making it quicker and cheaper to know what types of nematodes are in their fields and potentially save growers from using costly management methods or losing crops to undiagnosed nematode problems.

DiGennaro’s colleagues at the UF/IFAS Nematode Assay Lab receive about 7,000 samples each year from commercial growers, residents and golf courses in Florida. Lab specialists plan to view each sample with a digital microscope, which would capture about 15,000 images per sample, DiGennaro said. This can generate hundreds of thousands of images each year.

As it stands, when the lab receives a soil sample, specialists extract the nematodes from the soil and view them under a microscope. They identify each kind of harmful nematode, count how many of them there are and assess the potential for plant damage from nematodes.

The AI technology has the power to automate some of the processes currently being done manually, Zare said. To speed up the nematode identification process, DiGennaro and Zare will create a machine-learning algorithm.

“Essentially, we pair each training image with a label,” said Zare, whose lab specializes in developing machine-learning algorithms that can learn from imprecise image-level labels, which are usually much easier, faster and cheaper to create than precise training labels. “Machine learning algorithms generally learn by repeatedly updating parameters until the output of the algorithm matches the desired outputs provided in the training labels.”

So the algorithm will speed up the accurate identification of parasitic nematodes. If the project sees success, scientists could also tell growers which management practices would be most suitable to use to protect their crops.

Currently, growers use several methods to control nematodes. The most prevalent is through nematicides, which they typically put in the soil before they plant the crop. Other techniques include growing crops that resist the nematodes, rotating crops and using fungi and bacteria to eat the nematodes – also known as biological control.

“If artificial intelligence helps make nematode identification accurate and practical, it might reduce the lab’s labor costs and decrease turnaround time for nematode diagnosis,” said Billy Crow, UF/IFAS professor of nematology and director of the UF/IFAS Nematology Assay Lab. “The quicker we can tell a grower what is going on, the quicker they can do something about it.”

The University of Florida contributed this article.

Print & Email
florida nematodes 2021-04-14
Vicky Boyd
Previous: Tips for a healthy cotton stand
Next: Get to know your soil