The deflating effects of aflatoxin on cottonseed prices in the West continue to affect producers along the Colorado River and Central Arizona.

Hundred-dollar spreads between clean and unclean seed are not uncommon in a region where seed prices consistently rise above those in the rest of the Cotton Belt. These days, even though cottonseed plays a larger role in the economic mix of the cotton crop, aflatoxin seemingly draws less attention with producers than it does with those who market the cottonseed for them.

The fungus that causes aflatoxin, a strain of Aspergillus flavus, is endemic to the dry soils of the West and parts of Texas. Toxins produced by the fungus are carcinogenic at high levels, and when those levels are reached in cottonseed, it is not allowed in the commercial food chain.

Cottonseed containing 20 parts per billion (ppb) or more cannot be fed to dairy cattle because the toxin can be carried into the milk and transferred to humans. In some parts of Arizona, aflatoxin levels can reach levels of 200 to 300 ppb.

Costly Problem
For Farmers According to the Arizona Cotton Research and Protection Council (ACPRC), cottonseed with high levels of aflatoxin has the potential to cost between $20 and $50 per acre and could ultimately cost the Arizona cotton industry more than $10 million each year.

John Wetmore of Wetmore Enviro Lab in Casa Grande, Ariz., says that a risk of cross contamination of seed at the gin exists if seed piles are not managed properly.

The gins that have on-site storage space tend to manage the seed well, says Wetmore.

Where gins run into problems with contamination, according to Wetmore, is when there is a lot of traffic in open areas containing seed piles. Contaminated seed can be eliminated through a process called ammoniation, in which ammonia is used to remove the toxin. The additional cost incurred between the gin and the user of the seed affects price at both ends.

California, a major destination for Arizona cottonseed, does not allow transportation of ammoniated seed into the state. Seed that is high in aflatoxin has to be shipped into the state unprocessed and then ammoniated. 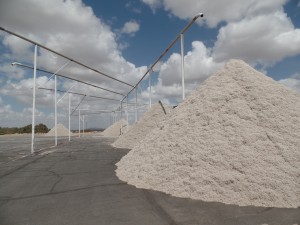 Major Discovery
Dr. Peter Cotty, USDA-ARS, identified a strain of atoxigenic fungus (AF36) that could overtake and replace the toxic strain, thus eliminating the risk in animals. In the late 1990s, he partnered with the Arizona Cotton Research and Protection Council (ACRPC) to develop AF36 into a commercial product specifically targeted for Arizona cotton producers.

Syngenta also produces an atoxigenic product for use on cotton. According to Liesner, an annual application of the atoxigenic fungus will build a non-toxic population that eliminates the bad fungus.

Reiterating statements made by two cottonseed marketers and Wetmore, Liesner says, „Producers are walking away from $100 or more per acre by not using in-field treatments.

Brent Murphree is the Cotton Board’s Regional Communication Manager for the West. Contact him via email at bmurphree@cottonboard.org.