Another Busy Schedule Of Special Events

As we move into the fall harvest season for cotton, I’d like to review the last three field day events I attended here in the Mid-South. What makes these events so memorable is that they happened on three consecutive days in early September. Initially, I didn’t think I could cover three events occurring in two different states in such a short period of time. But, somehow, everything went well – including the weather.

Two of the events were regular field days – the Missouri Annual Field Day at the Delta Center in Portageville and a similar event at the West Tennessee Ag Research Station in Jackson, Tenn. The third event was the official dedication of a new Bayer CropScience research facility at the Memphis Agricenter.

It had been several years since I attended the field day in Missouri. And, as I expected, the staff at the Delta Center in Portageville knows how to showcase important research data to farmers. Like other regions of the Mid-South, the cotton crop in SE Missouri was late this year but there was something for everybody at this event.

We heard more updates on Monsanto’s Roundup Ready Xtend program and how farmers should educate themselves for implementing this new technology before it is hopefully approved by the Environmental Protection Agency. There were also important briefings about Dow AgroScience’s Enlist program to control resistant weeds.

Perhaps the most informative part of this day was the update on how new cotton varieties had performed in research plots. Missouri Extension Research Associate Andrea Jones accompanied farmers and media through a long row of plots that had to extend at least 200 yards. As she walked along, she didn’t even refer to notes, but instead gave a spontaneous review of each variety and how it had performed in 2014 and previous years.

To say that Andrea knows the history of cotton varieties in the Missouri Bootheel is an understatement. This is why farmers in the region rely on her recommendations so much. She worked for many years with former Missouri Extension cotton specialist Bobby Phipps before he retired. Now she continues the tradition of having a thorough knowledge of which varieties will perform best in the region.

And make no mistake about it. Missouri farmers have many choices for varieties as we look ahead to next year. If you’re looking for timely information, I suggest you visit the Delta Center’s website at www.delta.cafnr.org. 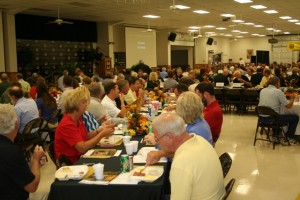 A big crowd of farmers and dignitaries turned out for the Annual Crop Field Day at the Delta Center in Portageville, Mo.

Big Crowd Attends Event In Jackson, Tenn
More than 200 persons attended the West Tennessee Ag Research Station’s crop field day on Sept. 3 in Jackson. It rained the previous night, but that didn’t curtail a busy schedule of activities for the event the next morning. Naturally, there seemed to be more interest in Extension entomologist Larry Steckel’s update on the resistant pigweed situation than any other presentation – mainly because this problem has been center stage in cotton production for several years. The good news is that West Tennessee producers are making headway with this problem and realize that having a zero tolerance for these weeds has to be a priority. Everyone is adhering to a program of residual herbicide programs – and the results are encouraging.

I also enjoyed hearing an irrigation update from Dr. Brian Leib and two of his students on variable rate irrigation and effectiveness of irrigation in a mixed soil environment.

Other informative reports were given by Dr. Don Tyler and Ryan Blair on cover crops and tillage, as well as new Extension cotton specialist Tyson Raper’s update on variety testing and defoliation.

I’ve always thought that West Tennessee producers faced unique challenges in cotton production. There isn’t much opportunity for a lot of irrigation because of rolling hills, and there is plenty of variation in soil composition for an area that stretches from Tiptonville in the NW corner of the region all the way south to the Mississippi state line. The question facing producers in this region is how will current low cotton prices affect cotton acreage in 2015. Only time will tell. For more details, go to the West Tennessee Research Station’s website at http://westtennessee.tennessee.edu/ 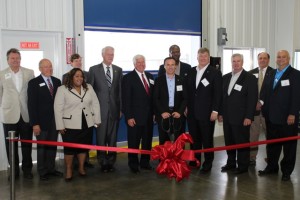 On the third consecutive day of my tour of Missouri and West Tennessee, I attended the dedication of the new Bayer CropScience Research facility at Agricenter International in Memphis, Tenn. In the summer of 2013, I was at the groundbreaking for this building, and it is hard to believe this futuristic facility could have been constructed in such a short amount of time.

I’ve always contended that the Memphis Agricenter is the best kept secret in the Mid-South area. I don’t know of another ag research facility that is located in the heart of a major urban setting. After touring this new Bayer research center, the Agricenter’s reputation will no longer be a secret. The rest of the country will certainly have to take notice.

The new facility is a $17 million, 76,000-square-foot greenhouse and headhouse. Its primary mission will be cultivating cotton and soybean solutions for the international market. This is part of Bayer’s commitment for investing in research and development, as well as expanding production and seed breeding facilities globally.

What struck me was how much of a boost this will be for cotton producers in the Mid-South. This is a region where cotton acreage has had to compete with grain crops in recent years. It’s nice to know that a global facility dedicated to cotton will be right here in the backyard of our cotton producers.

So, if you’re in the area, I advise you to visit this facility and the entire Memphis Agricenter. You’ll be pleasantly surprised.

In summary, these three events proved informative to all who attended. In my opinion, the commitment to cotton in the Mid-South remains strong – no matter what kind of challenge might exist.