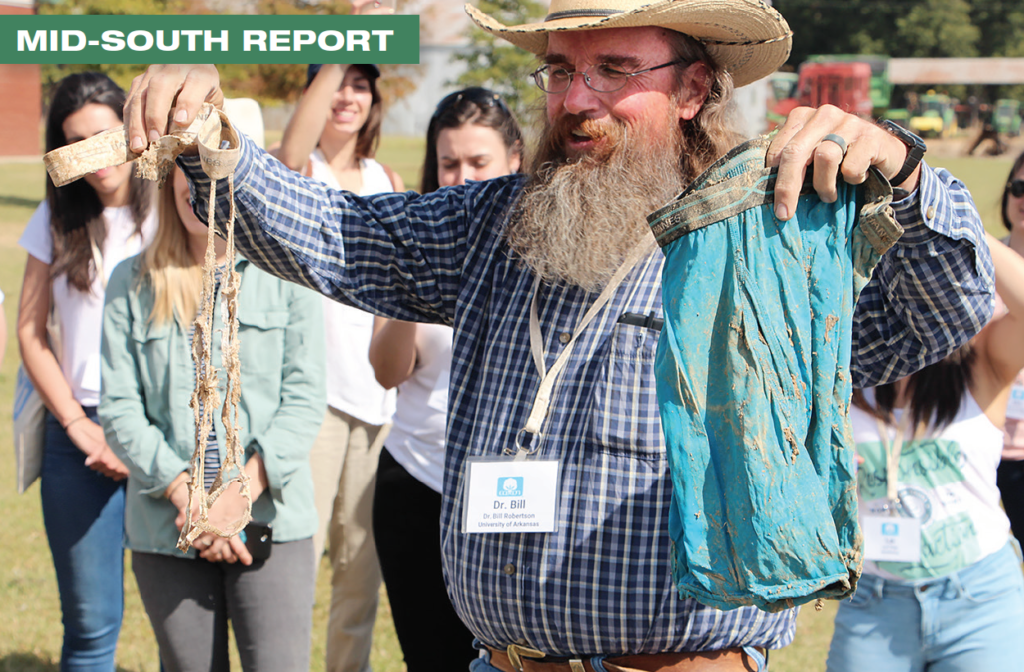 Bill Robertson shows a disintegrated pair of 100 percent cotton briefs that were buried for five weeks in a field with a cover crop, demonstrating active, healthy soil. On the right, a pair of polyester briefs is still intact.

As part of Cotton Incorporated’s sustainability initiative, cotton producers and researchers in the Mid-South continue to look at cover crops to build soil health, affect water quality and pinpoint optimal application for a range of situations.

Microbe Activity
The roots of the cover crop open the soil for better irrigation penetration and deeper microbe activity. The microbes have more nutrition available and build structure within the soil, creating a healthier, active environment for crop growth.

Robertson visually demonstrated this for a group of visiting brands and retailers in October 2017 at the University of Arkansas Lon Mann Cotton Research Station in Marianna.

Five weeks before the visit, Robertson buried men’s underwear in a cotton research plot with the intention of demonstrating microbe activity in cover crops. When he pulled the garments from the soil for the visiting group, the results were surprising, even for Robertson.

There was little or no decomposition to a pair of polyester underwear buried in a low-till field, even with a cover crop.

“When I dug up the 100-percent cotton underwear from the low-till plot with a cereal rye cover crop, they fell apart like paper, demonstrating active, healthy soil,” he says.

Cover Crops And Water
In addition, root action of the cover crop allows the primary crop to absorb moisture deeper within the soil. Robertson says water absorption has tripled in some cases where a cover crop is used. There is less run off, nutrient applications are more effective, soil loss is curtailed, and applied nutrients remain in the field and are not washed into the environment.

The cover crop water component also is being studied by Arlene Adviento-Borbe, a water researcher with the U.S. Department of Agriculture-Agricultural Research Service in Jonesboro, Arkansas. Adviento–Borbe is primarily concerned with preserving water quality and availability for agriculture in the Delta.
About half of the irrigated land in Arkansas is furrow irrigated. Tillage increases water penetration but also increases soil loss and the potential for nutrient loss. In her research this season, Adviento-Borbe will include nitrogen runoff rates and accumulation in fields with winter oats as a cover.

Extension specialist Lori Duncan is currently fine-tuning research gathered in Milan. She is studying how to select and manage cover crop species and mixes to maximize benefits for cotton.

“Our research has shown that some cover crop species and mixes can be a great tool for weed management, erosion control and even increasing lint yield,” Duncan says.

To get maximum benefit from the covers and to qualify for NRCS cost-share programs, the cover crop needs to be planted as early as possible. Duncan is focusing how to measure the success of cover crops planted early into a standing cotton crop and the value of planting cover crops late.

Duncan also says it appears cover crops help cotton withstand flood and drought conditions. This is because of improved soil structure and increased soil water-holding capacity, echoing findings in other parts of the Mid-South.

Brent Murphree is the Cotton Board’s Regional Communication Manager for the West. Contact him at bmurphree@cottonboard.org or (602) 810-1171.