Home » Home Page Feature » In Memoriam — The Passing Of A Legend: Loyd Colbert

In Memoriam — The Passing Of A Legend: Loyd Colbert

This Stalwart Of The Cotton Ginning Industry Made Significant Contributions During His Long Career. 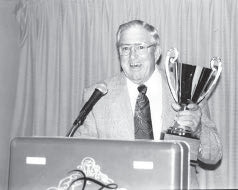 It is with deep sorrow that we announce the passing of Loyd E. Colbert, retired ginning legend from Modern Ginning in Blythe, California. Loyd passed away peacefully on Nov. 3 surrounded by his family.

Loyd, an Arkansas native, began his long career and distinguished service to the cotton ginning industry with the J.G. Boswell Co. in 1949 in Arizona. He began as a yard man and worked his way up the ladder to eventually become a top-rate cotton ginner during his 12 years with Boswell.

In 1961, Loyd went to work for the Continental Gin Co. where he was in charge of erecting cotton gins throughout the western United States. Knowledge of his expertise and reputation in the ginning industry spread quickly.

A pioneer in the development of the western cotton industry, Russell Giffen, hired Loyd to oversee the construction of a series of new cotton gins in the western San Joaquin Valley. Upon completion of this extensive and impressive construction project, Giffen Inc. hired Loyd as superintendent of ginning operations.

In 1966, Colbert sold and built a new gin for the Modern Ginning Co. in Blythe.

Following its completion, Loyd was hired as the vice president and manager where he worked until his retirement in April 2016.

During his tenure at Modern Ginning, Loyd became an industry stalwart serving on the California Cotton Ginners Association Board of Directors for more than 20 years. He served as the association’s chairman in 1987 and was recognized as the its Ginner of the Year in 1990.

Loyd also represented California at the national level as a National Cotton Council ginner delegate and received the Horace Hayden National Cotton Ginner of the Year Award from the NCC in 1995.

We would also take this moment to recognize Loyd for his service and contributions to the association and the entire cotton industry. Loyd supported the association in every way possible, and we are eternally grateful for all that he did. Loyd will be sorely missed.

Memorial services were held at Frye Chapel & Mortuary on Nov. 17.

In lieu of flowers, the family requests donations are made to the Modern Ginning Co. in memory of Loyd Colbert to be used to fund a local academic scholarship for graduating high school students.

The California Cotton Ginners and Growers Association contributed information for this article.