Like the legendary Icarus, the cotton market has spread its wings and continues to climb. The good news for cotton is that prices are climbing into the clouds without any fear of the sun’s heat melting its wings.

There is hardly any reason to be bearish. That statement, in itself is really the only bearish card to be played. The early week price consolidation on the heels of U.S. Department of Agriculture’s January supply-demand report enhanced the probability that the New York March contract will climb above 85 cents. Further, we do not see any fundamental reason for prices to stop there.

The roller-coaster price ride is on, and it’s really just beginning. The steep incline is in front of us, but traders will need the safety bar. The world shortage of quality cotton continues to propel prices higher. Dare I say Dollar Cotton? Granted, I thought the ride was over, but the world shortage is real.

The Indian Situation
Yet, one must discount the USDA analysis of the Indian situation and its forecast of near-record stocks in India. Indian prices are near a seasonal high, and any excess cotton has long been gone.

Seriously, does anyone really believe that Indian merchants or growers would hold any stocks with local prices, delivered to the mill, above 85 cents? Again…seriously, does anyone believe India would, for the second consecutive year, import large quantities of cotton when it is already the world’s largest producer?

Seriously, if India had cotton then, why would it now default on its export sales across all buyers? (Note that Indonesia was a major buyer of U.S. cotton recently, principally due to the cancellation of a purchase it had made from India.) The market has simply neutered the USDA’s Indian database.

Merchants also were initially able to add some carrying cost in the market, (spread between March and May and between May and July). However, the market has returned to an essentially flat position (little to no price difference in the three near-contract months). The market does not reflect the cost of carrying cotton in storage. Thus, immediate demand is the key. 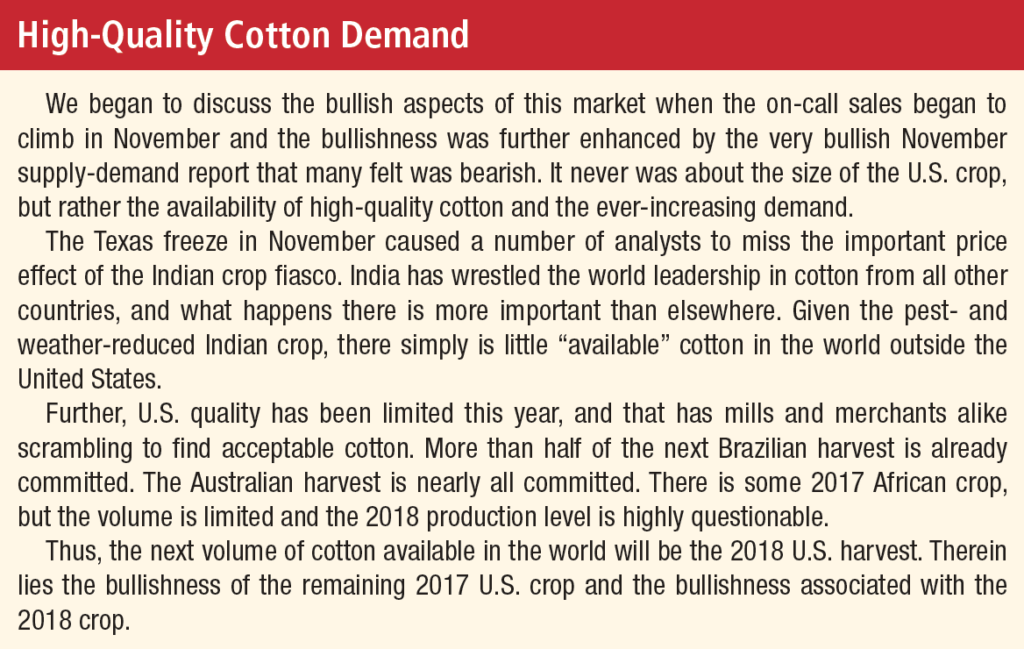 ‘Blew Through 75 Cents’
The harshness directed toward USDA is no stronger than I am on myself. Initially, I felt the March futures contract would top out at 78 cents and only get there after a visit back to the 75-cent mark. The market blew through 75 cents and never looked back. The roller coaster is here, and 75-78 cents will be seen only by the December 2018 contract as that contract month is likely to climb above such.

December futures will have to battle 2018 U.S. plantings of 13.2 million-13.5 million acres, nearly 1 million more than in 2017. The limiting feature of U.S. plantings will be the availability of harvesting machinery. It will neither be price nor desire. Growers will plant the near-“super” seeds developed by seed companies.

On-Call Sales Position
As much as many comment, “There is enough cotton, and the price increase is not based on fundamentals,” they are simply looking only at the very short run. Yet, boosting the price is the ever-strengthening mill on-call sales position versus the on-call purchases. As commented a month ago, “Watch the bull’s horns grow by looking at the mill on-call sales position.”

Try as I can, I cannot find bearishness in the market. Export cancellations, maybe. Yet, if a mill wants any volume of cotton, the only consistent supply is in the United States.