The Cotton Research and Promotion Program has announced dates for the 2016 Young Guns Tour of Cotton Incorporated headquarters in Raleigh, N.C. The Young Guns Tour targets young cotton producers who have not had the opportunity to visit the industry’s research facility. 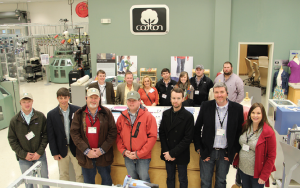 On March 20-22, 2016, Cotton Incorporated and the Cotton Board will host Western and Southwestern growers in Raleigh. The tour for the Mid-South and Southeast will take place June 19-21. There is no charge to cotton producers. Participants are flown into Raleigh, N.C., where they will be provided a hotel room, all necessary transportation and meals. They will get to see firsthand how Cotton Incorporated and the Cotton Board put their assessment dollars to work in the various departments at CI. Participants will also have the opportunity to visit a spinning mill.

“It is important that producers see the facility they helped build,” says Bob Stanley, The Cotton Board Regional Communications Manager for the Southwest. “Keeping young producers engaged in the process helps to keep fresh ideas flowing, which benefits the Program.”

The first Young Guns Tour took place in 2012 and was a great success, drawing participants from across the Cotton Belt. Since then, it has hosted more than 100 cotton producers under the age of 45. The goal of these tours is to encourage young cotton producers to be active in the program and local cotton organizations as well.

“We often hear the question, What’s going to happen when all the old guys are gone?” says Monty Bain, Southeast Regional Communications Manager for The Cotton Board. “This tour provides a way to engage the next generation and keep them invested in cotton.”

The tour is open to growers of all ages, as well. The Cotton Board and Cotton Incorporated hope to maintain interest in the program by sharing their work to keep U.S. cotton viable for generations to come.

According to a 2014 U.S. Department of Agriculture report on the 2012 Agricultural Census, the average age of all farmers in the United States has increased with each census since 1982 when the average age was 50.5 years old. The last census found that the average had risen to 58.3.

The average age of cotton farmers is slightly less at 55.8. According to a January 2015 report from USDA, using data from the same census, the average age of cotton farmers is slowly creeping up. Only 21 percent of growers were under the age of 45. Fifty-one percent of cotton producers are between the ages of 45 and 64. That number is down by 2 percent, only because there was a larger percentage increase in growers over the age of 65.

In the West, and throughout the Cotton Belt, many young producers are discouraged by current low profit margins for the crop and loss of agricultural land to urban development or drought. By focusing on this specific age group, the Cotton Research and Promotion Program hopes to encourage producers under the age of 45 to get involved and see a bigger picture view of the industry.

Brent Murphree is the Cotton Board’s Regional Communications Manager for the West. Contact him via email at bmurphree@cottonboard.org.