At the end of the 2010 crop year, China’s ending stocks (cotton still on hand from that and previous crop years) had reached a very low level of only 10.6 million bales — 23 percent or roughly three months of annual use. Beginning in the 2011 crop year, China began to significantly increase its imports of cotton in an apparently conscious effort to build stocks back to a more comfortable level.

A certain level of stocks is needed and desired. Stocks provide supply to the pipeline, transitioning from “old crop” to “new crop.” Stocks also provide a buffer or cushion in case the next crop is reduced or shorter than expected for any reason. If stocks are considered high, this generally reduces pressure on both old crop and new crop supplies, and prices decline. If stocks are considered low, this generally puts pressure on old crop and new crop supply, and prices increase.

I’m often asked the question: “Why did China do this?” Well, I personally don’t think the magnitude of the buildup in stocks was intentional. First of all, what China probably did not and could not have anticipated was the protracted decline in its mill use of cotton. At the time, China was ramping up imports, and its mill use declined about 15 million bales due to the increased use of man-made fibers. Also for two consecutive years in 2011 and 2012, China’s own cotton production increased. So in at least those two years, they had increased production plus increased imports but declining cotton use. That’s not a good formula. Fiber quality may also have been an issue with China desiring to improve both the quality and quantity of its stocks.

Over the course of four years, China’s stocks increased more than sixfold. Yet for a good portion of this time, cotton prices held up pretty well (remember, I said increasing stocks typically mean weaker prices, but that did not happen right away in this case). It was not until last season and again this season that prices have taken the fall. There are three reasons for this delayed reaction.

First, China was, after all, buying cotton. Although the purchases weren’t showing up as increased mill use and were building stocks instead, China was buying. Second, China’s stocks were increasing, but the country for the most part was not utilizing those stocks and in fact kept importing more. Although the buildup was there numerically, “effective stocks” were much less. The market could and did pretty much ignore the stocks situation because there were no economic and policy mechanisms in place to effectively utilize those stocks. Thirdly, although stocks in China were increasing, stocks in the rest of the world were not. U.S. cotton stocks at the end of the 2013 crop year, for example, were only 2.35 million bales.

And frankly, fiber quality has always been a big uncertainty. Some of this cotton could be 3 years old or older and stored in less-than-proper facilities. Premiums paid to U.S. growers for high-quality cotton have been very good. This is likely a reflection of the rest of the world’s stocks situation and the uncertainty about the quality and usefulness of Chinese stocks.

China Stocks – ‘A Big Mystery’
When China began building stocks with world cotton demand trending down at the same time, the warning shot had been fired and it was only a matter of time before the battle would start.

The China stocks situation has always been a big mystery — from the reasons why stocks were allowed to accumulate so dramatically in the first place, to fiber quality questions, to the policy and pricing mechanisms that will ultimately shape the future course of these stocks and impact global supply/demand and prices.
According to the U.S. Department of Agriculture’s latest estimates, China is believed to have between 63 million and 67 million bales of cotton stocks. This is believed to be a combination of state/government reserve (about 51 million bales) and merchant inventory (about 14 million bales). On May 3, China began another round of sales from its government reserves. This series of sales will continue through August with total sales not to exceed 9.2 million bales. Daily sales are not to exceed 138,000 bales. 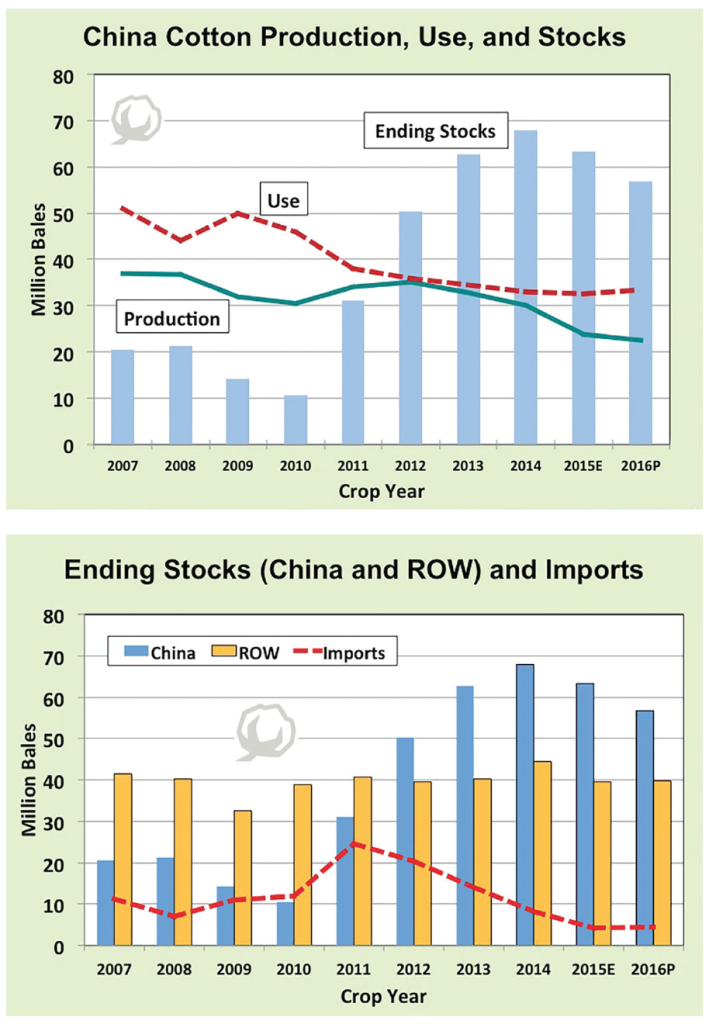 2016 Sales Round
Given last year’s low sales, the results of this 2016 round has been much anticipated. For the period May 3-12, sales totaled roughly 1.1 million bales or 12 percent of the 9.2 million bale total for May 3-Aug. 31. These 1.1 million bales sold were comprised of 770,000 bales of imported cotton and 334,000 bales of China cotton. Sales from government reserves are believed to be for China’s domestic mill use only. Exports are not expected but cannot be ruled out. China has said that from September through February, it plans to purchase/import cotton for the purpose of improving the fiber quality of its reserve. Thus far, the cotton market seems to have taken the sales pretty much in stride. Prices are down 2 to 3 percent, but it is too early to know how prices will play out. China’s reserve sales are only one factor in the mix of things that will determine how prices fare in 2016 and for the 2017 crop as well.

China Sales: Factors To Watch
With regard to China and these sales, several components are worth watching. Will the pace of sales remain steady and near the daily and weekly allowable amounts, or will sales diminish over time? This will, in part, depend on the quality of the available cotton and the pricing. If quality is an issue, it will show up and sales will lag behind. This may improve the outlook for U.S. exports. Will the quality and competitive pricing of sales result in increased use of cotton in Chinese mills? More importantly, if cotton use begins to improve, will that ultimately mean more U.S. cotton exports? What will be the level of China’s stocks next year this time and even in 2018? The clock is ticking and these stocks are only getting older.

In USDA’s May supply/demand report, a little bit of information may have gone unnoticed. The expected U.S. average price for the 2016 crop is projected to be 47 to 67 cents per pound. If we take the midpoint at 57, that would be roughly the same as for last year’s crop. It also means that there are some things that could take us much lower than where this market is now, or we could even see better pricing opportunities.
From the producer and industry standpoint, there’s little, if anything, we can do about what’s going on in China. If I’m a cotton farmer, what would worry me right now is the 2017 crop if low prices continue to hang around that long. The marketing loan is supposed to protect the grower from low prices; but it’s likely the loan rate could be 50 cents or less for the 2017 crop. Combine that with the recent 2-cent decrease in the transportation cost adjustment for the AWP calculation, and we could be looking at a 4- to 5-cent reduction in the LDP/MLG for the 2017 crop from what it was for most of the 2015 crop year. 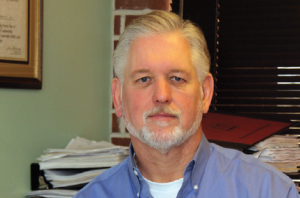 Need More Information?
Don Shurley is professor emeritus of Cotton Economics, Department of Agricultural and Applied Economics, at the University of Georgia-Tifton campus. He can be reached at (229) 386-3512 or via email at: donshur@uga.edu. Additional cotton information can be found by visiting the UGA cotton website at www.ugacotton.com or www.caes.uga.edu/departments/agecon.