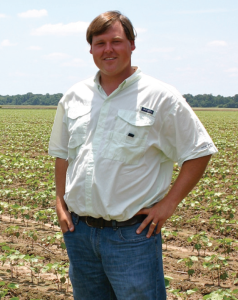 A.J. Hood was the 2015 Transform My Community grand prize winner.

A.J. Hood knows firsthand the personal gratification derived from taking the time to compose a heartfelt essay about how his community could be transformed. Hood, a grower and farm manager for Tillar & Co., an 18,000-acre tract of land in southeast Arkansas, was motivated to enter the contest in 2015 for very personal reasons.

His brother had lived for more than 40 years with several disabilities before losing his courageous battle this past spring.

Transform My Community, sponsored by Dow AgroSciences and Cotton Farming, is a way for cotton growers and crop consultants to parlay suggestions on how local communities could be “transformed” with the positive experiences they’ve had using Transform® WG insecticide.

The 2016 Transform My Community contest kicks off Aug. 1 and runs through Sept. 30, 2016. Due to Section 18 label use restrictions, only cotton growers and consultants in Alabama, Arkansas, Louisiana, Mississippi, Missouri and Tennessee are eligible to submit essays.

“I would have loved for my brother to have had the opportunity to play baseball,” Hood says. “So when I found out that the Miracle League of Southeast Arkansas (SEARK) has set out on a mission to build a ‘Field of Dreams’ for kids with disabilities, I thought it was the perfect ‘community-transforming’ opportunity.”

“Our goals for Transform My Community were to start a program that would make an impression and connect with long-term community development,” Pilcher says. “That is exactly what A.J. was able to do in his essay.”

Formed in September 2014, the Miracle League of SEARK made a push to raise $150,000 to start construction on the region’s first-of-its-kind field in southeast Arkansas. Karen Connelley, president of the SEARK Miracle League, said the Transform My Community cash donation could not have come at a better time, and considers it the catalyst that helped fuel fundraising efforts.

“Fundraising efforts were well underway when we received the gift from Dow AgroSciences,” Connelley says. “Shortly after, when word of the gift got out, we received a matching donation from a farm family who had read the winning announcement in Cotton Farming magazine. That was followed by a commitment from the city of Monticello and things started steamrolling from there.”

A groundbreaking ceremony was held this past May and construction is slated to begin later this fall. Connelley expects the field will be completed by spring 2017.

While it means a great deal to Hood that his essay was selected and he was able to help transform the city of Monticello, he is also grateful for an insecticide that has transformed his cotton fields.

“Without Transform insecticide, it would be difficult to raise a good cotton crop,” Hood says. “The plant bug populations in our area were significant last season and without Transform we wouldn’t have had nearly the yield and quality of cotton we were able to produce.

“We owe a big thanks to all the Extension specialists and crop consultants who are such strong supporters of Transform as they were a big part of why we received a Section 18 emergency exemption in Arkansas. Not only is Transform highly effective in controlling cotton pests, but we need this chemistry to help manage growing insecticide resistance concerns.”

Written essays of up to 500 words in length will be accepted through Sept. 30, 2016. In addition to the $20,000 cash award to support a winning community or organization, the grand prize winner will receive a $1,000 cash prize and Yeti® cooler. For more information, contact your Dow AgroSciences sales representative or visit www.TransformMyCommunity.com.

“I didn’t really think we would win but thought it was worth at least taking the time to write the essay,” Hood says. “The SEARK Miracle League is very important to me and my family. To think that a short essay has done so much to transform Monticello and the lives of so many kids with disabilities makes me very proud. I’m really happy the contest is continuing and would like to encourage all eligible growers and consultants to give serious thought to entering.”