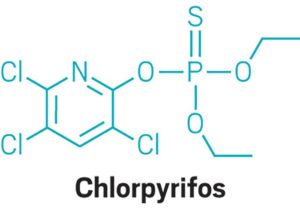 Manufacturers of the material say it can continue to be used safely, and the U.S. Environmental Protection Agency said last month it would not impose a nationwide ban. DPR says it will send cancellation notices to chlorpyrifos registrants.
California farmers who need the material to protect their crops likely won’t have to stop using it right away.

Product registrants have 15 calendar days from the date of the notice to request an administrative hearing, according to DPR.

If a hearing is requested, the product remains on the market and available for use in the meantime. If no request is made, the department issues an order canceling the registration and detailing the terms of use or sale of any remaining product, if allowed.

As it is, chlorpyrifos use has declined sharply under new restrictions that took effect this year, says Ruthann Anderson, executive director of the California Association of Pest Control Advisers. About 10,000 pounds of chlorpyrifos have been applied in 2019 as of June — down from the 900,000 pounds applied in 2016, according to figures from the California Environmental Protection Agency.

Additional restrictions on chlorpyrifos applications effective this year include limiting its use to a few situations where no viable alternative exists; no aerial applications; a 150-foot setback from houses, businesses, schools and other sensitive sites at all times; a limit of 40 acres per 24-hour period; and a quarter-mile buffer zone during all allowed applications and for 24 hours afterward.

These restrictions have made it tougher to fight off some pests, Anderson says, citing the Asian citrus psyllid. He says this represents a mortal threat to California citrus groves because of the plant disease it can carry, huanglongbing.

“If you don’t spray the entire block, if there’s a larger section than 40 acres, that buffer is just going to move the psyllids into the buffer and then move them back into the orchard,” Anderson says, “and so there’s no efficacy in terms of making that application.”

In a letter to DPR dated July 19, California Department of Food and Agriculture Secretary Karen Ross says that California farmers have few viable alternatives to chlorpyrifos.

An economic analysis was ready September but, “it is likely that cancellation of chlorpyrifos will increase pest management costs in several of California’s major crops, including alfalfa, almond, citrus, cotton, grape and walnut,” Ross wrote.

“Alternatives to chlorpyrifos are in some cases considerably more expensive or require multiple applications to achieve similar efficacy.”

Other alternatives can lead to secondary pest outbreaks or the development of resistance issues, she says.

In a July 15 letter to DPR, the president of the California Agri-cultural Commissioners and Sealers Association, Tim Pelican, wrote that application restrictions are drastically lowering use of the material.

“Given the premise that the cancellation is based on chlorpyrifos being an air toxic contaminant, we are also requesting to know if granular and drip applications are a risk and therefore may be preserved as a use,” Pelican wrote.

In response, DPR Assistant Director Karen Morrison says cancellations are only being issued for products where DPR has concerns over spray drift or dietary exposure.

“However, DPR will actively review exposures associated with chlorpyrifos products it did not propose to cancel,” Morrison wrote. “There are no products registered exclusively for use via drip irrigation and such applications may result in unacceptable dietary exposures.”

Crops Grown Outside The State

Anderson asked how the state would account for such residue on crops grown outside California.

“How will the state ban the import of any products that potentially have that residue?” Anderson asks. “Will they increase their testing? Will they work with other states, countries?”

The state action on chlorpyrifos was announced at the same time DPR announced the members of a working group assigned to come up with short- and long-term alternatives.

The group is composed of members of the farming and environmental sectors and independent pest-control advisers. The group will hold public workshops in January, with dates and locations to be announced, and will accept public comment in the meantime via email at alternatives@cdpr.ca.gov.

A roster of working group members may be found at www.cdpr.ca.gov/docs/chlorpyrifos/workgroup.htm. The group’s work is underwritten by a $5 million-plus appropriation from the recently enacted 2019-20 state budget.

Kevin Hecteman is an assistant editor of Ag Alert. He may be contacted at khecteman@cfbf.com. The California Farm Bureau Federation contributed this article.