BY GARY RAINES
COMMODITY NETWORK
CHIEF ECONOMIST, FIBERS AND TEXTILES
INTL FCStone Inc.
With cotton production increasingly concentrated in one province, Xin-jiang, and a generous subsidy now in place for pro- ducers of the fiber located there, the Chinese government finally has announced the long awaited subsidy program for the eastern cotton-producing provinces.

The country’s National Development and Reform Commission (NDRC) states that cotton producers in nine inland provinces – Shandong, Hubei, Hunan, Hebei, Jiangsu, Anhui, Henan, Jiangxi and Gansu – will be eligible for this new subsidy. The subsidy for 2014 is 2,000 yuan/ton (14.8 cents/pound), and payments for 2015 and onwards will be 60 percent of the Xinjiang cotton subsidy, pre- sumably no more than 2,000 yuan/ton.

The announcement was met with little fanfare as cotton produc- ers in the eastern inland provinces have long understood the country’s strategic shift to increasing grain acreage (i.e. corn, wheat and rice) while reducing cotton acreage. 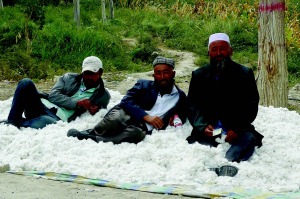 For 2013/14, Chinese production was expected to fade to 30 million bales – the lowest in nine years. And, weaker spot and for- ward markets along with the low subsidy for inland provinces indi- cate nationwide plantings will continue to fade next spring.

Even before the subsidy, the inland provinces’ share of cotton production was on the decline. As recent reports have indicated, the combined share of Chinese cotton produced outside the key Xinjiang province sagged from more than 60 percent five years ago to last season.

While this outlook is all well and good, our concern, if not the entire global cotton industry, is the country is already sitting atop a veritable mountain of cotton inventories numbering roughly 62.2 million bales.

In November, policymakers said the country will not release extra cotton import quota in 2015 beyond the WTO-mandated mini- mum of 4.1 million bales. This leaves us with little optimism for upward adjustments in the USDA expectation of imports of seven million bales.

In fact, recent grumblings towards the end of 2014 indicated China’s import numbers would actually be revised lower. At the time of this report, near-record stocks and little additional import quota strongly suggest Chinese cotton imports will struggle in the near term, a considerable bear looming over the global market.

Contact Gary Raines via email at gary.raines@intlfcstone.com. Comments in this article are market commentary and are not to be construed as market advice.