Call it the perfect education for pursuing a career in the cotton industry. In fact, you couldn’t find a better description for the International Cotton Institute conducted every summer at the University of Memphis.

The school, which began in 1995, offers an eightweek curriculum that covers every aspect of cotton marketing and production. Through the years, it has helped many young students gain a better understanding of the industry.

A perfect example of this occurred for Anthony Wills, a Memphian who works for Cargill Cotton. The graduate of Christian Brothers High School in Memphis earned his bachelor’s degree from Louisiana State University and attended graduate school at the University of Memphis. 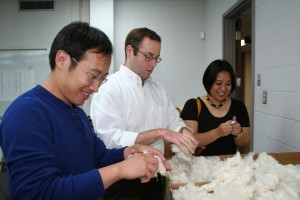 During graduate school, he received a letter advertising for an internship at Cargill, and he wound up working six months for the Memphis-based company – even though he didn’t have any prior experience in cotton.

That internship eventually led to a full-time job, and now he works in Gastonia, N.C., in the Cargill Memphis Eastern origination office. When he was selected to be a part of the class this past summer, he jumped at the opportunity.

“I had done some work in analytics for Cargill, and recently I’ve joined our team in Gastonia,” he says. “So, I had learned a lot by working with farmers as an originating merchant.”

However, he took a giant leap on the learning curve after completing the eight-week class in Memphis. He and his classmates received an intense orientation on classing, futures, warehousing, ginning, spinning and many other aspects of the industry.

New Friendships
In addition to a busy class schedule that featured noted leaders from every segment of the industry, there was the bonus of interaction with many international students.

“It is an absolute understatement to say that this class broadens your horizons,” says Wills. “I know for sure that there were students that I’ll stay in touch with for the rest of my life. That’s how valuable the dialogue was with them.”

When this year’s class visited Sledge Taylor’s farm in Como, Miss., it was an enlightening experience. Everyone soon realized how much manpower is required to deliver a cotton crop each year.

“You can’t appreciate what a farmer goes through until you visit his farm,” says Wills. “That was a valuable learning experience.” Bill Griffin, long-time director of the International Cotton Institute, says the school experience opens doors for all attendees.

“In Anthony’s case, he has gained some valuable knowledge as he starts his career with Cargill,” he says. “This will definitely benefit him in the long run.”

Anthony Wills (center) says he will benefit from his experience at the International Cotton Institute.