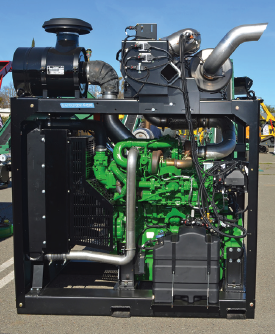 Rather than mandating diesel engine upgrades to curb air pollution, the California Air Resources Board plans to dangle the proverbial carrot to see if financial incentives will spur voluntary improvements within the agricultural industry.

Under the proposed FARMER — or Funding Agricultural Replacement Measures for Emission Reductions — program, the board plans to offer $136 million in incentives to help farmers buy new off-road farm equipment with cleaner-burning diesel engines. The board is under a tight time frame and must have all the funds — which were included in the state’s 2017-18 budget — encumbered by June 30, 2019, and fully spent by June 30, 2021.

Gov. Jerry Brown also has included an additional $100 million for the FARMER program in his proposed 2018-19 budget, which under state law must be approved by June 30, 2018.

Currently only heavy duty on-road diesel trucks that log more than 1,000 miles annually and buses fall under the California Statewide Truck and Bus Rule. Under the regulation adopted in 2008, those vehicles are under a mandate to have 2010 model year or the equivalent engines by Jan. 1, 2023.

Tractors and other off-road farm equipment aren’t under any such mandate, but that could change, says Roger Isom, president and CEO of the California Cotton Ginners and Growers Association.
Several environmental groups have been pushing the air board to require all Tier 0 and 1 engines be upgraded by 2024. That amounts to about 1,700 new tractors per year, which outstrips manufacturers’ production capacity, Isom says.

“(The air board is) going back to the drawing board, but there are mandates coming,” he says. “We’re trying to show them — look how many tractors we’ve replaced already, we don’t need those mandates.”

‘Huge Shot In The Arm’
According to the proposed FARMER program, the air board would underwrite up to 80 percent of the cost of new off-road farm equipment powered by cleaner-burning diesel engines.

“This is a huge shot in the arm to help the ag industry,” Isom says “It’s something I think will be successful.”
New to this program are proposed incentives to cover up to 75 percent of the cost of zero-emission utility terrain vehicles, which Isom praises.

“It’s something that we’ve been advocating for for several years, and we’re glad to see it on there,” he says. “There’s significant interest in the ag community. This is a unique program and I think a real good opportunity.”

Formula For Funding
Of the state’s 35 air districts, 16 will be involved in the FARMER program and will be responsible for approving and funding projects on the local level, says Erin Uchida, CARB program lead.

The amount of funding allocated to each participating district takes into account the number of what the state refers to as “off-road, diesel-fueled mobile agricultural equipment” in use locally. Statewide, CARB estimates there are 160,000 pieces not counting stationary equipment, such as pump engines, and on-road vehicles, such as heavy duty trucks, she says.

The formula also considers the amount of nitrogen oxide and PM 2.5 emissions generated by the equipment. PM 2.5 are particulates 2.5 microns or smaller in diameter. The average human hair, by comparison, is 70-100 microns in diameter.

Under those criteria, the San Joaquin Valley Air Pollution Control District is expected to receive $107 million because of the amount of mobile agricultural equipment in operation and the region’s