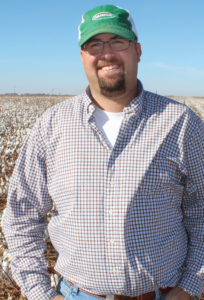 Ty Turnipseed, who farms cotton in West Texas, was impressed by the high yield and high quality potential he saw last year in DP 1646 B2XF.

Ty Turnipseed is a fourth-generation West Texas farmer whose family shares a bond to cotton and Texas Tech football.

His great grandfather Bert Eads and grandfather Travis Turnipseed farmed cotton and ran cattle. Ty’s father Bruce started farming with Travis in 1991, and Ty came on board Turnipseed Family Farms in 2017. The operation is in Hockley County about 12 miles southeast of Levelland.

Besides being fans, an interesting family tie to Texas Tech football dates back to Eads.

“My great granddad was part of the Hockley County Sheriff’s Posse, a recreational club based in Levelland,” Ty says.

“He was on the committee that helped establish the Masked Rider as the primary mascot for Texas Tech University.

My great granddad provided the saddle that the Masked Rider used when he led the team onto the field in the 1954 Gator Bowl. And we still have that saddle.”

“Following a 2-inch rain, we were hitting moisture when planting, and the field looked good,” he says.

“Unfortunately, the ground was so dry it quickly soaked up the rain. And then a hot, dry wind blew in, so we fired up the pivot right behind the planter.

“Because of the harsh weather, the DP 1646 B2XF was a little late coming up. But once it emerged and started growing, I could see the good potential it was going to have. I managed the DP 1646 B2XF with 26 ounces of plant growth regulator, which encouraged it to put on more fruiting positions.

“In 2017, Mother Nature threw everything she had at us. Hot, dry weather and three days of sand storms in June, followed by three or four days of hard rain and some hail on the July 4 holiday. The wind was blowing about 70 mph while it was raining, which is just about as bad as hail hitting the cotton.” 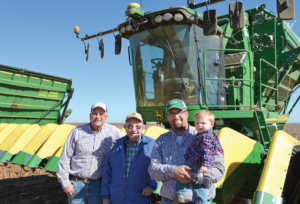 Four generations gather in front of the cotton stripper during the 2017 harvest. From left, Bruce, Travis, Ty and Kye Turnipseed.

Yield And Quality Potential
Tough conditions continued in August when a hail storm hit the field of DP 1646 B2XF. One half of the circle was almost hailed out while the other half escaped major damage. Cool, wet and cloudy conditions continued throughout the month across West Texas, which reduced the amount of heat units available to the crop. Despite the less-than-optimal weather over which he had no control, Ty was still able to assess the yield and quality potential of DP 1646 B2XF.

“High yields and high quality are important to me in a variety,” he says. “Although I couldn’t stop a hail storm in August, I could still see DP 1646 B2XF’s potential. The half of the circle that didn’t get hail made more than 2 bales per acre. The half that got hail made just below a bale.

“Considering the adverse weather the field experienced, I was pleased with the yield. If we have better growing conditions this year, I think DP 1646 B2XF will be a high-yielder.

“DP 1646 B2XF also has a good fiber package. Staple length, uniformity and color were good. We did have low mic, which was prevalent across West Texas last year because of the cool, wet August.”

Unusual Defoliation Timing
As the season wound down, Ty says the game plan for defoliation timing was affected. He typically makes his first application when the cotton is 60 to 80 percent open. However, in 2017, when he cut into the top boll at 20 percent open, it was ready.

“We don’t usually defoliate when the crop is green, lush and only 20 percent open, but it was getting late, and we didn’t want a freeze to sneak up on us,” Ty says. “We sprayed 32 ounces of Prep and 8 ounces of Ginstar and got good results as far as boll opening and leaf drop. We came back with a shot of paraquat and starting stripping several days later.”

“These varieties are all strong cotton with good vigor,” he says. “Strong cotton has to stand up to West Texas weather, and DP 1646 B2XF has the potential to do that 100 percent. It’s bred to make cotton.

“This year, my operation will be planted to mostly Deltapine varieties — DP 1646 B2XF, DP 1845 B3XF and DP 1820 B3XF. Monsanto and Deltapine are keeping the technology up to date. We can control glyphosate-resistant pigweed with XtendiMax herbicide with VaporGrip Technology, and we haven’t sprayed for bollworms in years because of the Bollgard technology.”

Ty says growing cotton is in his blood as he recalls riding on an old 484 stripper as a child with his granddad and operating the dump lever.

“I put in a lot of late hours and long days during cotton planting and at harvest time,” he says. “But having the support of my wife Kristen, daughter Taryn and son Kye makes it all worth it.”