Cottonseed ground into flour to deliver protein to millions of people, a project to which Dr. Keerti Rathore has devoted more than half his professional career, is one step closer to reality.

Texas A&M University Chancellor John Sharp, who oversees Texas A&M AgriLife Research along with 11 universities and seven state agencies, says Rathore’s work will have a dramatic effect across the world.

“The work and dedication of Dr. Rathore has paid off,” Sharp says. “He and his team exemplify the values of the Texas A&M system, and because of them, more than half a billion people across the world may have access to a new form of protein, and our farmers will be able to earn a much better living.”

Dr. Kater Hake, vice president of agricultural and environmental research at Cotton Incorporated, says it has been a decades-long journey.

“Gossypol suppression in cottonseed has been part of our funded research portfolio for over 30 years,” Hake says. “It took time to tap the innate protein potential in the seed; time for the right technologies to develop; and time for the right research team to come along.” 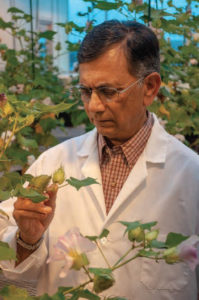 Tom Wedegaertner, director of cottonseed research and marketing at Cotton Inc., underscores the potential of the breakthrough and the journey through the regulatory process.

“Gossypol in the leaves and stalks of the cotton plant serve as a pest deterrent, but its presence in the seed serves no purpose,” Wedegaertner says. “The more widespread use of cottonseed as a livestock feed and even for human consumption has been stymied by the natural levels of gossypol in the seed. As we progress through the regulatory review, the ability to utilize the protein potential in the seed gets that much closer.”

The recent USDA action confirms that TAM66274 and any cotton lines derived from crosses between TAM66274 and conventional cotton or biotechnology-derived cotton granted non-regulated status by APHIS are no longer considered federally regulated articles, he says.

Only six months after starting to work with Texas A&M in 1995, Rathore, who had never seen cotton growing in a field before coming to Texas, decided something needed to be done about the underutilized protein in cottonseed.

For the past 23 years, he has been determined to create cotton plants that produce seeds containing gossypol well below what the U.S. Food and Drug Administration considers safe levels while maintaining normal levels of gossypol and related chemicals in the foliage, floral parts, boll rind and roots.

Gossypol, while toxic to humans and monogastric animals such as pigs, birds, fish and rodents, is useful to cotton plants for defense against insects and pathogens. Therefore, cottonseed containing gossypol is currently used mainly as ruminant animal feed, either as whole seed or cottonseed meal after oil extraction.

“Biotechnology tools that made the ULGCS technology successful had just become available when I started looking at the potential to make this new source of protein available to hundreds of millions of people,” Rathore says.

“I also realized the value to cotton farmers everywhere of removing gossypol from the cottonseed because such a product is likely to improve their income without any extra effort on their part or additional input. Such a product can also be important from the standpoint of sustainability because farmers will produce fiber, feed and food from the same crop.”

Cotton-producing countries with a limited supply of feed protein can realize great benefits by using this seed-derived protein as a feed for poultry, swine or aquaculture species, Rathore says.

These animals are significantly more efficient in converting plant protein into high-quality meat protein. Egg and broiler production could become the most efficient use of any available feed protein source, including ULGCS. 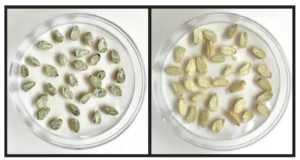 Seeds containing gossypol (left) have glands showing up as black specs. The specs in the ultra-low gossypol cottonseeds (right) are still there, but are much lighter, reflecting the very low levels of gossypol in the deregulated cottonseed.

Despite the obstacles, failures and lack of funding at times, Rathore says it was the dedication and loyalty of his team and supporters such as the late Dr. Norman Borlaug, who was known as the “father of the Green Revolution,” that kept him going on this project.

“Dr. Borlaug was the biggest supporter of this project, and during the lean times when I was struggling to get funding and after the failed attempts — there were many, it was his words of encouragement that provided the inspiration to continue,” Rathore says.

While there were many team members over the years working on the project, he says key contributors to its advancement were Dr. Devendra Pandeya, LeAnne Campbell, Dr. Sreenath Palle and Dr. Sunilkumar Ganesan, all who worked in his laboratory at

Texas A&M, as well as by Dr. Robert Stipanovic and associates with USDA-Agricultural Research Service who conducted biochemical analysis of gossypol levels in the ULGCS lines.

“It feels good to have come this far as Texas A&M AgriLife is only the fourth public institution to have accomplished such a feat as deregulation of an engineered crop.”