Today’s Texas cotton ginner has a forward-thinking approach to the future and isn’t deterred by low prices or fewer acres. That’s the opinion of Ross Rutherford, product general manager of Lummus Corporation, and a long-time observer of the Texas cotton ginning industry.

In fact, Rutherford says a prime example of this philosophy is the way Texas ginners continue to invest in technology and timely upgrades.

“A lot of this is being driven by consolidation within the ginning industry, but much of it is a reflection of our customers looking to the future,” he says.

Low cotton prices are nothing new for producers and ginners, according to Rutherford. And, since crop options are limited in the country’s largest cotton production state (Texas), gin owners aren’t afraid of making investments in machinery.

Some examples of new ginning equipment will be on display at the Texas Cotton Ginners’ Association Trade Show on April 9-10 at the Lubbock Civic Center. 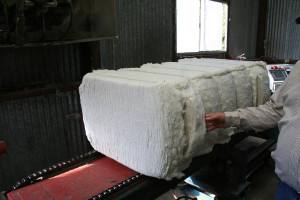 Maintaining an efficient bale press at the gin is crucial.

Ginners Must Embrace Technology
To the uninformed outsider, it might be hard to understand that cotton has its own unique infrastructure that includes gins and warehouses.

However, as Rutherford points out, cotton does not acquire any value until it is in a bale ready to be shipped. For that reason, he is encouraged that many ginners are choosing to replace equipment.

“Ginners have seen low prices in the past, and that hasn’t stopped them from making a timely investment,” he says. “When it comes to technology, the innovative ginner knows he has to get on board or he’ll get left behind.”

Another trend is having an impact on the decision to invest in new ginning technology. Many older gins are finding it more difficult to maintain old equipment that is now obsolete. According to Rutherford, gin equipment companies can no longer replace old parts.

Other examples of gins investing in cotton’s future involve proactive efforts on issues such as contamination, labor and safety. He says equipment companies are trying to do their part to promote clean bales at the gin and safety in all aspects of the operation.

“At our gin schools, safety continues to be a major priority in the classes,” says Rutherford. “We can never become complacent on this.”