Home » Features » Give Your Soils A Health Check-Up

California Project Looks At Cover Crops As A Prescription For Ailing Soils. 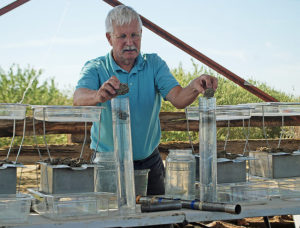 In the past few years, the term “healthy soils” has become a widely used buzzword surrounded by a lot of hype.
But the question remains, what are healthy soils? Much like the term “sustainability,” healthy soils mean different things to different people.

Although scientists may use several complex tests to measure soil health, Dr. Jeff Mitchell, a University of California, Davis, cropping systems specialist, says growers can gauge it in their own fields by answering a set of simple questions.

1. Does your soil blow or flow away?

2. Does your soil allow water to soak in quickly?

3. Does your soil drain?

4. Does your soil crust?

5. Does your crop recover most of the nutrients you apply?

6. Are there areas where plants die or grow poorly?

If you answered “yes” to questions 1, 4 and/or 6 and “no” to questions 2, 3 and/or 5, chances are your soil is ailing.
Gary Martin, who grows cotton, alfalfa, pistachios and almonds near Mendota, California, can relate to those questions as one of his cotton fields with sandy soil had problems with reduced water infiltration and soil crusting.

Years ago, Martin incorporate 5 tons of poultry manure per acre annually into the soil, building organic matter and the related water-holding properties.

“It made the soil just wonderful,” he says. “The problem was they found other uses for poultry manure that priced us out of the market and the availability went away.”

Mitchell approached Martin three years ago about participating in a healthy soils demonstration project that falls under the California Department of Food and Agriculture’s Climate Smart Agriculture program. The research is being funded in part from a $237,000 CDFA grant.

The challenge with using cover crops in California is you’re essentially farming in a desert, Mitchell says. Although cover crops can succeed, he says it’s not as simple as borrowing a system that has worked elsewhere.

Learning Along The Way

After harvest and stalk chopping in 2017, Martin started by applying 2 tons of green waste compost per acre to one part of the demonstration field, followed by disking, chiseling and pulling beds. He then drilled 60 pounds per acre of a 95% triticale and 5% radish cover crop blend.

Martin says he ended up with a striped field and about a 60% germination rate as the drill planted the seed too deep on top of the beds. Shortly before planting, he worked the green cover crop into the beds. He then pre-irrigated as normal before planting his cotton.

The other part of the field was left untreated as the check and managed as he normally would.

After 2018 harvest, Martin applied the same 2 tons of green waste compost per acre on the treated portion, but instead kept the field flat after disking and chiseling. He flew on the seed and had nearly 100% germination.

But the increased plant material also created challenges during the 2019 spring, even after the cover crop was burned down and allowed to “melt down” for three weeks.

“We attempted to pull the beds and there was so much plant material, the beds were uneven and cloddy,” Martin says. “We ended up having to disk and chisel, then used a bed disk to pull the beds. So in the end, we did a lot more tillage to work that in and certainly, that wasn’t our goal. We want to be minimal out there.”

So far, he hasn’t seen any difference in irrigation infiltration rates between the treated and untreated blocks. Later in the summer, when the plants have depleted the soil moisture profile, he still has difficulty replenishing it.

Cover Crops Come At A Cost 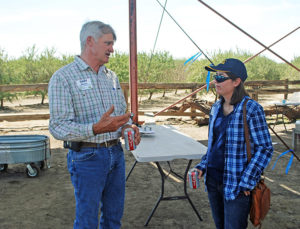 Between spreading the compost and seeding the cover, he says he invested about $100 per acre, not counting the extra tillage. Without the funding from the demonstration project, Martin says he didn’t believe the current system was economically sustainable, especially with low cotton prices.

But he says he’s determined to make it work even after the end of the research project. Martin’s already considering installing subsurface drip in the field, which would help deliver water to the plant’s root system.

The drip also would lend itself to maintaining existing beds and cover crops paired with strip till. In addition, he may look at other cover crop blends that are more economical.

Not only is conserving natural resources and improving the soil the right thing to do, but Martin — who also is California chairman of the National Cotton Council’s American Cotton Producers — says buyers are beginning to require it.

Roger Isom, president and CEO of the California Cotton Ginners and Growers Association, says Sacramento lawmakers have bought into the healthy soils program and are encouraging more research.

“If we get more guys trying it, we’ll find out what works and what doesn’t work and what is reality,” he says.

Putting Numbers To The Treatments

As part of the California healthy soils project, Geoff Koch, a UC Davis doctoral student, will monitor soil function, greenhouse emissions and yields in both Martin’s field and Mitchell’s long-term trial at the Westside Field Station near Five Points, California.

So far, the blocks with cover crops have seen an increase of 37 tons per acre of organic matter and have captured 15 tons of carbon per acre — all with only about 12 inches of water, Mitchell says.