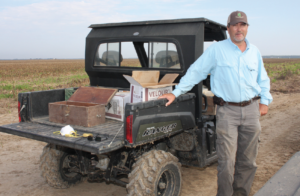 Billy Bryant consults within a 20-mile radius of Greenwood, Mississippi.

In 1983, Billy Bryant was so excited about starting his profession as an independent crop consultant that the day he graduated from Mississippi State University, before he left the campus, he took his test and got his consultant license.
By that time, he had racked up eight years’ scouting experience. He had worked during the summers for consultant Billy Harris, who was a Mississippi Agricultural Consultants Association charter member. After graduating with a degree in agronomy, Bryant worked part-time for consultant Jim McCrory for two summers.

“I started with nothing after graduation, so it took me a few years to build up my consultant business,” says Bryant, who services crops within a 20-mile radius of Greenwood, Mississippi. “I scouted for a few growers that first year, and

I also worked for a Leflore County farmer, Walter Pillow, who let me work on his farm anytime I wasn’t scouting for other growers. This was a really good experience, seeing firsthand what growers face.

“Pillow knew where I was headed, so he spent a lot of time teaching me things that would’ve otherwise taken a lifetime to learn. That was in 1983, and here in 2017, I still work for him. His three sons have taken over the large operation, and I scout all their crops.”

Bryant offers full consultant services, from soil sampling and variety selection all the way through defoliation. Starting in November, he sits down with his growers to develop a farm plan for the next year, beginning with variety and hybrid selection.

“We’ll determine what crops and which varieties will go for each field,” he says. “And then in February and March, I pull soil samples and start scouting in April. September and October are big soil sampling months, which is my busiest time of the year. I generally run two Polaris Rangers and two GTS units.”

“When a grower hires an independent crop consultant, he brings somebody on his team who’s trained in insect control, weed control, disease identification and fertility,” he says. “He gets a whole lot more than just a bug checker.

We’re trained to identify problems, so we can pick up on things a farmer might miss.

“A crop consultant generally goes to a farm on a schedule. This consistency gives the farmer an opportunity to visit with me personally if he has questions about a problem he might have in his fields.”

“We spend time together in the field, helping growers minimize problems,” he says. “Consultants also have alliances with allied industry. As an independent crop consultant, I make unbiased recommendations on products to help growers do the best job possible for the least cost.”