As a long-time runnerup to China’s cotton story, India is now taking center stage, at least as the world’s largest producer. India’s agriculture is critically dependent on the monsoon, and this year’s late start resulted in a large, unexpected shift toward cotton acreage as farmers opted for a more drought-hardy crop. However, despite the delay, rainfall totals made a healthy comeback after planting. As a result, India is likely to produce a 31-million bale crop this year, passing China’s production for the first time in more
than half a century.

India’s consumption has also prospered in the last few years, largely because of China’s supply control programs. China’s cotton yarn imports were not nearly as restricted as raw cotton imports. Among many others, India’s spinning industry was able to meet that demand in a profitable way.

There still is a price advantage to Indian yarn in China’s markets, but the size of the advantage has diminished. With foreign demand for cotton yarn now fading, India’s cotton use will likely plateau this season. Future consumption will likely require weaving capacity.

The price of India’s cotton is beginning to have an impact on the Cotton Corporation of India’s (CCI) Minimum Support Price (MSP) program. 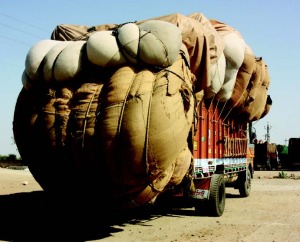 The CCI is the government corporation responsible for the purchase and marketing of cotton when prices fall below certain published levels. Rather than purchasing just the lint ex-gin, the CCI actually purchases seed cotton from the farmers and commission’s ginning.

Intervention in the markets pre-ginning complicates matters for most western observers, particularly as ginning is a widely dispersed industry, and there are little official data about quantity or quality. However, the main point to note about the MSP is that it gives farmers more flexibility and comfort in timing their sales.

Diminished demand, a large crop and the nearness of the MSP make India’s exports much more difficult to forecast. Adding in the currency volatility only makes guessing more difficult.

U.S. cotton has been more highly priced than Indian flat-price offers over the last few months. Whatever happens, the United States and India will be in a fierce competition for internationally sourced cotton this season.

Contact Chris Kramedjian at chris.kramedjian@intlfcstone.com. Comments in this article are commentary and are not to be construed as market advice.