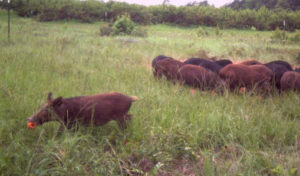 “Landowners throughout Texas are constantly seeing wild pigs and their damage,” says Dr. Jim Cathey, associate director of the NRI. “Unfortunately, until now, we didn’t have a good method of collecting the information on where the pigs were sighted and what type of damage they were doing.”

Cathey says the easy-to-use tool, developed by the institute’s data analytics team, provides a unique portal for Texas landowners and homeowners to note and quickly report such sightings. It can be found in the “Report Wild Pigs” section of the institute’s Wild Pigs website at https://wildpigs.nri.tamu.edu/.

“For many years, Texas A&M AgriLife Extension Service has worked through its county agents to bring programming that frames the problem Texans face when dealing with wild pigs,” Cathey says. “Those programs on biology, wild pig reduction techniques, and laws and regulations spurred a lot of ‘pig stories,’ and the number of those stories has grown over time.

“Now instead of hearing wild pig reports by individuals, this new tool will allow landowners to capture the information so it can be used in a statewide database that will allow everyone to really understand the breadth of the wild pig problem across Texas.”

Cathey says it takes only a few minutes for a landowner using the tool to capture data on the wild pigs and includes an option for submitting photos of the animals and/or their damage.

“The site has a location feature with a GPS map interface so you can click and show exactly where the wild pigs or the damage they had caused was sighted. It also gives the longitude and latitude of that location.

“The electronic fill-in survey allows the landowner to notate specific information, including the number of pigs seen, the class of pigs — whether male, female, younger or older — the kind of damage, such as wallowing and rooting, and what type of damage there is, such as crop or landscape damage or torn fencing.”

Cathey says data from the submitted reports will be used to support the institute’s outreach efforts and help locate areas of high activity to guide both land management and educational efforts across the state.

“Wild pigs are one of the greatest invasive species problems in the United States, having a negative effect on agricultural crops and livestock, water quality, wildlife populations and their habitats, and more recently, suburban landscapes,” he says. “There are an estimated 5 million wild pigs throughout the U.S. with an estimated 2.6 million in Texas alone. And the wild pig crop damage and control costs are reported to be greater than $52 million annually in Texas.”

Cathey says in areas where wild pig populations are concentrated near streams and other water bodies, they contribute bacteria, including some forms of E. coli known to be harmful to humans.

Cathey says AgriLife Extension county agents have been successful in providing opportunities to relay educational information to landowners about effective wild pig removal and management. This is critical in reducing wild pig populations and improving the water quality of Texas streams.

“We provide presentations, publications, smartphone applications, social media content and videos done in collaboration with the Texas State Soil and Water Conservation Board,” he says.

“We hope landowners and the general public will be able to know more about the biology and behavior of these animals even as we improve on those reduction measures used to control them.”