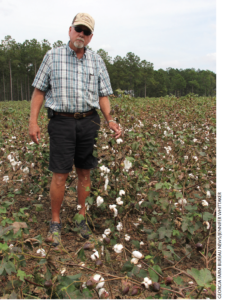 Colquitt County cotton farmer Gettis Wingate holds one of his windblown plants upright to show how tall the cotton should be standing.

“From preliminary observations, it is safe to say that every cotton field in Georgia has been negatively impacted by Irma to varying degrees,” Whitaker wrote in a report presented to U.S. Secretary of Agriculture Sonny Perdue while Perdue was touring damaged cotton fields in Colquitt County Sept. 15.

Unlike Hurricane Matthew last year, which only impacted Southeast Georgia, Irma whirled across the width of Georgia’s Coastal Plain, where the majority of the state’s cotton is grown, leaving lint laying on the ground or hanging in stretched sodden clumps from its burrs. Georgia Cotton Commission Chairman Bart Davis, who participated in the tour, said cotton growers near Athens told him they’ve experienced similar damage.

Growers and Whitaker say the biggest yield loss will come from the cotton plants Irma blew over.

Cotton Plants Blown Over
“Cotton was blown around to varying degrees across the entire state. This can affect yield losses several different ways that can be difficult to estimate,” Whitaker said. “Much of the cotton I’ve seen has been blown over and wrapped together causing spraying and harvesting issues for the rest of the season.”

With plants laying across the rows where growers usually drive the wheels of their spraying equipment when they’re defoliating their crop, many will have to rely on crop dusters. Colquitt County cotton grower Darren Hembree estimates it costs him $4 an acre to defoliate his crop using his equipment versus $8 an acre to hire a crop duster.

“When the picker is going over cotton in the direction the stalk is laying down it’s not going to pick it, but it will do better if you come at it against the way it is laying,” Hembree said. “But we won’t have time to drive over [the same row of] the field in two different directions.”

Hembree, who chairs the Georgia Farm Bureau Cotton Committee, said he’ll have to drive his picker at a slower speed through the fields than he usually does when harvesting in hopes the machine will be able to grasp the cotton and to keep the twisted stalks from clogging up his machine. Fellow Colquitt County grower Gettis Wingate said he’s known growers to pick a field twice to harvest as much cotton as possible.

“With the price of diesel fuel and cotton, it wouldn’t be worth it,” Gettis said.

Leaf Scald
Leaf scald is also expected to cost crop yield. When Irma blew the stalks over, she left the underside of the cotton leaves upturned and exposed to the sun scalding the leaves.

“Windblown cotton will suffer from the fact that leaves that were turned over will get sun-bleached and ultimately fall off,” Whitaker said. “This will greatly affect the ability of the crop to continue to fill and mature bolls that are immature.”

If the plants don’t get enough nutrients they will shed cotton bolls less than 15 days old, he added. Another problem is that bolls still on the stalks that are now laying close to the ground will be susceptible to boll rot if more rain comes.

Wingate, who has been growing cotton for 30 years, said he’s never experienced such a storm. “Cotton isn’t bringing enough as it is and then you take 20 to 30 percent of your crop away, that’s a hard pill to swallow,” he said. “You have crop insurance, but it will only cover your guarantee and you might make that much so you won’t really get money back.”
Whitaker says if only 10 percent of the cotton crop is lost statewide, this equates to a $100 million loss for the industry.