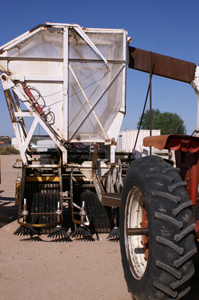 The volume of cotton that gets left on the ground during the harvest season has always been a source of frustration for producers.

In the Western Cotton Belt, farmers are able to gather some of that cotton using Rood cotton harvesters. The harvesters use slotted belts to pick the cotton from the ground.

The machines are very effective at picking up cotton that has a low moisture content. In most of Arizona, the use of Rood harvesters is a regular cropping practice.

Despite their efficiency, cotton producers and ginners are highly divided on whether the harvesters are worth the effort of moving them through the field.

In 1949, William E. Rood, Jr., invented a harvester that could pick up cotton from the ground. His inspiration was watching someone hit a mattress using a coiled spring, which picked up and dropped material as it flexed.

When mechanical harvesting became the norm, Rood hit the jackpot as producers in the West used his machine to gather the fiber that spindle cotton pickers knocked to the ground.

He applied for his patent in 1962, and in a short time his name became an adjective as producers began referring to ground cotton as Rood cotton.

While cotton roods gather a great deal of cotton, they also pick up almost everything else they encounter in the field – dirt, rocks, tarp, plastic bags, sticks, etc. As a result, there is a greater risk of contamination and an increased need for cleaning.

For the most part, the cotton classes pretty well. Grades of 41 with a four or five leaf count are common.

Marketing cooperatives and many merchants make a point of letting buyers know the cotton’s origin and sell the cotton to manufacturers who are aware of the lint’s origins. If prices are right, which is most of the time, producers can make additional money from their crops.

However, there are three things producers and ginners need to be aware of: Dust counts will be higher in the field and in the gin; wear and tear on gin equipment will be much greater, and traders worry about the potential for a reputation of dirty or contaminated cotton.

Slowing Down The Gin

If heavy particles get to the gin saws, even insignificant dulling reduces gin efficiency.

Most gins wait until the end of the ginning season to run the ground cotton through the gin.

Since the roods pick up almost everything, the potential for contamination from plastics and foreign matter is a great concern. Any contamination can cause huge problems with mills.

Ginners’ groups have had heated discussions on banning rood cotton in their gins. In the San Joaquin Valley of California, no gin has taken ground cotton for more than 20 years.

In Arizona, where ground cotton makes up about seven percent of the cotton ginned, gins are more reluctant to take such stands. As noted earlier, it is always the last thing ginned during the season.

Brent Murphree is the Cotton Board’s Regional Communication Manager for the West and resides in Maricopa, Ariz. Interested parties may contact him at bmurphree@cottonboard.com.