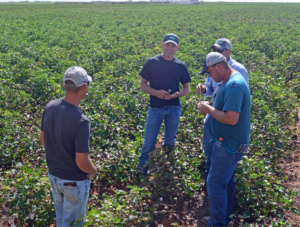 Cotton producers in West Texas got a sneak peak at up to a dozen potential new varietal releases during Deltapine’s annual field day at Blaine Nichols Farm near Seminole.

Nichols and his father, Mark, are two of about 200 producers nationwide that participate in Deltapine’s NPE, or New Product Evaluators, program. For the past 10 years or so, the Nichols have planted advanced experimental lines in large 3- to 5-acre plots.

They farm the plots as they would their commercial acreage, with each plot being harvested, graded and milled separately.

Come December or January when the data on the experimental varieties has been disseminated, NPE producers participate in a conference call to vote on the varieties they think should be released.
Between the experimental and commercial varieties, the Nichols have about 20 Deltapine large-scale plots on their farm this season.

Mark says they continue to participate because of the benefits the NPE trials provide the industry. Blaine says he’s anxious to see how the new XtendFlex system will work once the low-volatility formulation of dicamba is registered.

The varieties have been engineered to contain genes that impart resistance to both glyphosate and dicamba herbicides sprayed over the top.

Although the Nichols have several XtendFlex varieties on their farm, the plants were only sprayed over the top with Roundup.

Blaine stays on top of weeds using the Roundup Ready system as well as several different residual herbicides. He also has adopted a zero-tolerance approach to weeds, but he says controlling Palmer amaranth and Russian thistle as well as a host of others is a constant challenge.

“We have a bit of everything out here that if you don’t stay on top of will get away from you,” Blaine says.
Not only would XtendiMax or Roundup Xtend herbicide provide another mode of action, but he says it would likely eliminate at least one pass across the field for in-season weed control on their farm. 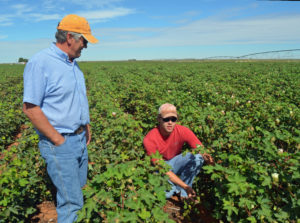 Father Abe Peters (left) and son Woodrow check out the boll load on some of the Deltapine experimental varieties.

For Abe Peters and his son Woodrow, who farm near Seminole, the field day offered a chance to see some of the new varieties in the pipeline.

“We’re kind of wanting to see what’s what,” Abe says. “Yield is always an issue. Yield is something that you look for and yield is the money maker.”

Hayden Davis, who farms with his grandfather near Lamesa, says he tries to attend as many field days as possible to try keep up with the ever-changing technology.

“It’s a whole new deal,” he says. “You get used to your old varieties, you know what you can do and what you can’t do with them. Then you get this new stuff in.”

Traditionally, Davis says, they plant one or two varieties. But this season, “we were all across the board.”
At the field day, Deltapine showed off a number of experimental varieties with two naturally occurring genes that impart resistance to rootknot nematode. 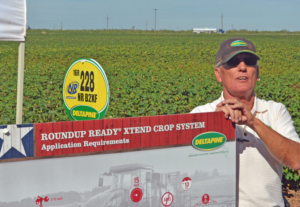 “From Lubbock south, nematodes are the No. 1 challenge before weeds,” says Larry Martin, a Deltapine sales rep in West Texas. “These varieties should give you the same benefits as a peanut rotation.”
The nematode-resistant varieties, if they pass the muster, will carry the NR designation. In addition, they will contain XtendFlex weed-control stacked traits, and most also will contain Bollgard II insect protection.
With varieties containing only one resistance gene, Martin says nematodes continue to reproduce in the soil. But when the varieties contain two resistance genes, nematodes are not able to reproduce and populations decline throughout the season.

After three consecutive years of planting NR varieties in the same field, nematode populations were significantly reduced, he says, citing trial results. Producers can then follow with a non-resistant variety the following year with good results.

But the nematodes will quickly rebound after two consecutive years of non-NR varieties.
The NR varieties also have been tested in fields without nematodes, and they performed nearly as well as varieties without the NR trait, Martin says.