A lifetime in Agriculture 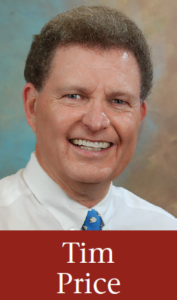 I grew up on a farm in Louisiana and have been involved in agriculture my entire life. Serving as state vice president and president of Future Farmers of America (FFA) while in high school and college set the course for my agricultural career.

While I was state FFA president, I scouted cotton and participated in what was at that time a revolutionary nutrient management program on Buddy Logan’s farm in Gilliam, La. In 1971, we collected petioles from cotton plants and shipped them to Phoenix, Ariz., where tissue analysis was performed to determine nutrient requirements. So I had a taste early on of understanding that cotton production was part of a bigger world than I had ever imagined. I later received degrees from LSU and Texas A&M.

After graduate school, I worked for the Federal Land Bank in New Orleans, La., as a research analyst. From 1977 to 1984, I saw the best of times and the worst of times. I saw land values increase, marginal land being cleared for farming, loans being leveraged, and highly inflationary interest rates. This “perfect storm” resulted in the farm crisis, the American Agriculture Movement, Farm Aid concerts, tractorcades in Washington, D.C., and bankrupt farmers standing at elevators to protect their grain. I remember all of those things…

In 1984, I went to work for the American Farm Bureau Federation (AFBF) to head up their cotton, rice and sugar department. That introduced me to the world of national and international agricultural policy-making and three unique commodities with which I have had long-term ties. During part of that time, “Kika” de la Garza (D-TX) was chairman of the Agricultural Committee and a great advocate for agriculture. In those days, the political climate was more agriculture versus non-agriculture, so we had a lot of bi-partisan support.

When I was advocating on behalf of agriculture, I never forgot how much the industry meant to me and what it was like to see people lose their family farms during turbulent times. During my tenure with AFBF, I was invited to spend a month in Germany representing U.S. agriculture as part of the McCloy Fellowship program, which was designed to enhance cooperation between West Germany and the United States. I also participated in GATT trade negotiations in Geneva.

My first time to attend the Mid-South Farm & Gin Show was as a speaker on behalf of the AFBF in the 1980s. Fast forward to 2003 when Lee Todd retired as executive vice president of the Southern Cotton Ginners Association. I was offered the position and have enjoyed representing ginners in five Mid-South states. SCGA works with its gins on all issues that affect them and provides safety training and education on many different topics.

The SCGA’s Mid-South Farm & Gin Show, which has been held for the past 64 years, brings together approximately 400 companies that provide products and services to farmers. Educational seminars are offered, and we try to create an atmosphere in which farmers can interact with one another and exchange ideas. We want to be relevant to the major decision-makers who are involved with Mid-South crops.

I have seen the ups and downs of cotton and established relationships with Mid-South farmers that I am proud to call “seasoned soldiers.” They have trained on the battlefronts of farm programs, changes in global agriculture and volatility in the commodity markets. These veteran farmers have proved they can meet the challenges of a global agriculture market that we face in the Mid-South.

So we come to today. We can be positive about the advances in technology and strong industry leadership that continue to keep cotton viable and moving forward. Cotton is an amazing, historical and multi-faceted part of our economy that is made up of many stakeholders. And I am proud to be a part of this great Mid-South agriculture.