Snowpack Slows In The West

An unusually warm, dry January slowed snowpack accumulation in much of the West, according to data from the second 2015 forecast by the United States Department of Agriculture’s National Water and Climate Center (NWCC). California, Arizona and New Mexico, as well as parts of Colorado, Utah, Oregon and Nevada, remain in prolonged drought.

“This is as low a snowpack as I’ve seen across the Sierra Nevada and Cascades for many locations at this time of year,” he says. 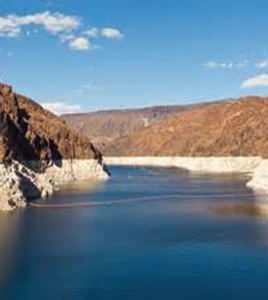 Several Snow Telemetry (SNOTEL) sites in those ranges are snowless, which is very unusual for this time of year.

Even the precipitation in the Southwest wasn’t enough to take these regions out of drought conditions. In Western states where snowmelt accounts for the majority of seasonal water supply, information about snowpack serves as an indicator of future water availability.

Streamflow in the West consists largely of accumulated mountain snow that melts and flows into streams as temperatures warm in spring and summer. NWCC scientists analyze the snowpack, air temperature, soil moisture and other measurements taken from remote sites to develop the water supply forecasts.

The Cascades of Oregon and Washington have received normal levels of precipitation this water year, but it’s mostly fallen as rain instead of snow. California’s Sierra Nevada has seen little rain or snow. The extreme drought in California may be further aggravated by reduced streamflow in other parts of the West.

“This month the inflow forecast for Lake Powell fell from 90 to 70 percent of normal,” says McCarthy. “Because southern California draws water from the Colorado River, this may impact their water supply.”

Monitoring To Continue
The NWCC, part of USDA’s Natural Resources Conservation Service, monitors conditions year-round and will continue to issue monthly forecasts until June. The water supply forecast is part of several USDA efforts to improve public awareness and mitigate the impacts of climate change, including drought and other extreme weather events.

Through the creation of the National Drought Resilience Partnership, launched as part of the President’s Climate Action Plan, federal agencies are working closely with states, tribes and local governments to develop a coordinated response to drought.

Since 1939, USDA has conducted snow surveys and issued regular water supply forecasts. Other resources on drought include the U.S. Drought Monitor. For information on USDA’s drought efforts, visit USDA Disaster and Drought Information.

USDA contributed information for this article. Go to www.usda.gov for additional details.