“Succession means many things and may include transitioning ownership of property after the owner’s death or during the farmer’s lifetime, should the owner decide to quit farming,” says John Shanklin, of the McCleskey Law Firm in Lubbock, Texas, which is surrounded by the massive West Texas cotton patch.

And a succession plan may not always involve family, he says.

There are numerous succession options. Two common ones are making sure children have equal shares and wanting the operation to remain in farming in perpetuity. The following scenario outlines these and other options. 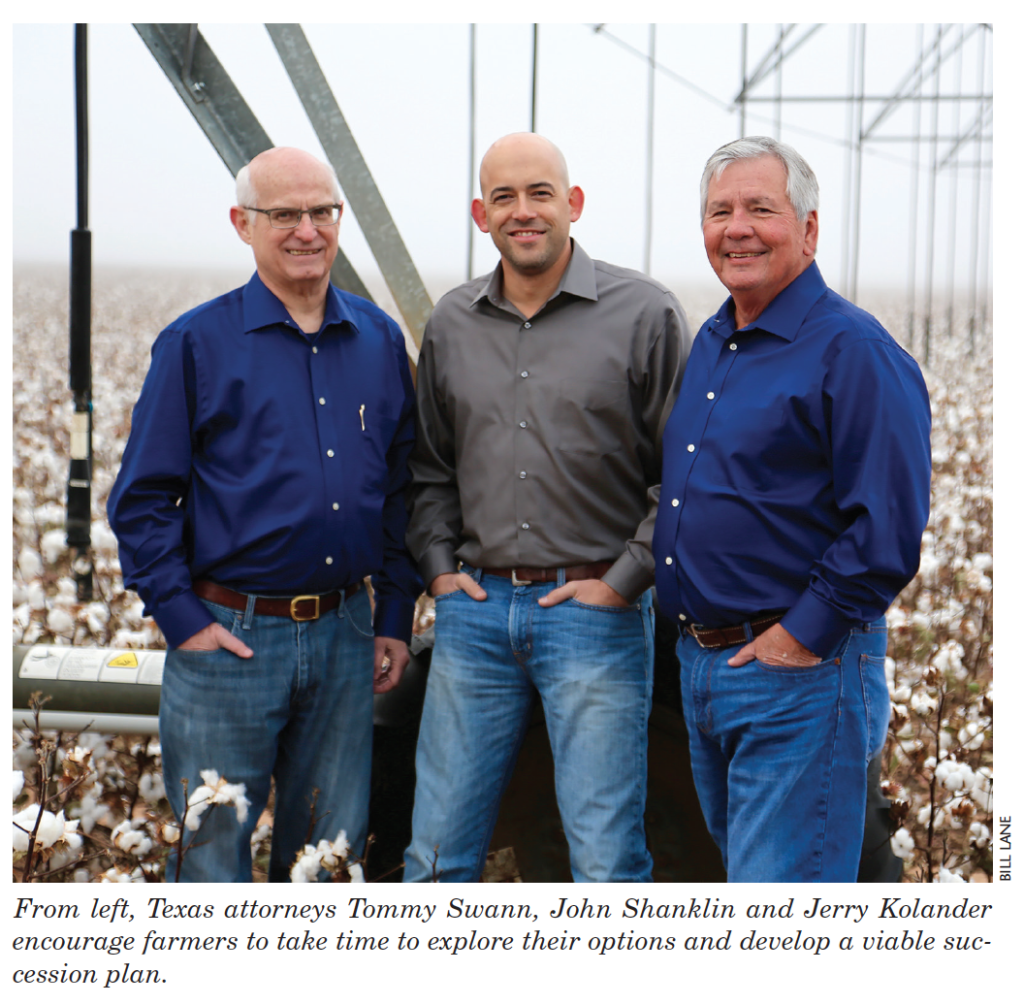 A cotton farmer has two sections of land and is contemplating how to pass it on to his four children.

Dad wants his children to have four equal shares. The answer?

It may become more complicated once you have more information, which is why it’s helpful having an attorney walk you through the process.

“The lawyer’s job is to point out all the potential problems and show you the answers,” says Jerry Kolander, McCleskey’s managing partner.

Consider these details Kolander adds to the above scenario.

Have A Plan, Know Options

Most of the people who come to see Kolander or his colleagues have an idea of what they want to do, but just as many have not thought through all the scenarios.

Tommy Swann, another McCleskey attorney who grew up in West Texas, says, “I had one farmer come in who was trying to preserve his farming operations forever but had no idea if future generations want to farm.”

A farmer wanting to keep his farm operating in perpetuity is a common concern. However, there may be logical reasons to do this that eventually become illogical.

For example, Shanklin heard of a farmer who wanted to put the land in a trust and restrict the trustee from either selling it or allowing anyone other than family to farm it.

“But what if someone doesn’t want to farm that land?” he says.

Swann adds, “Or if it doesn’t become profitable, and the land is more valuable as commercial property,” which happens in Lubbock as the city of about 250,000 people continues to grow into former cotton fields.

Things To Think About

And there’s a lot to take into consideration in forming a plan. Here are just a few examples.

Family dynamics. Is it clear what the heirs want? Are all family members on board?

“How do they get along?” asks Kolander.

Swann remembers a family of three children where two ganged up on one, creating conflicts after their parents died while the children were trying to probate the will.

“It helps if you can get along, but it helps to plan as if you can’t,” Shanklin says with a smile.

What if the succession does not involve family?

“I had a client who had a young guy helping him farm, and the client needed an easy way to transition his operation to the young man. We set up a new limited liability company, and our client loaned the younger man his contribution to the LLC. Once the young man received distributions from the LLC to pay the farmer, he’d bought his way in,” says Shanklin.

It also set them up to make it easier for the younger man to eventually buy out his partner.

As mentioned before, does the farmer want the land to stay in farming forever?

Swann says, “We tell clients to consider whether their heirs want to farm, or if the land could be profitable in other ways they haven’t thought of. It’s like a father who expects his son to be a great athlete, but the son enjoys playing the violin. You can’t force a child into something.”

Kolander adds, “An attorney outlines the pros and cons and what risks the client is willing to run, so he or she can decide on options. There’s a way to keep the property as a farm, but do you tie future generations to specific things to make that happen? And what about people having to buy family members out to someone who will farm?”

Shanklin says, “What if the land might become valuable because of surrounding development and one family member cannot afford to buy another out? Based on the appraisal, he could leverage the land, but now they’ve encumbered it at a high level, and the land is not producing enough. That would be stressful.”

Are there government programs that can complicate things?

Shanklin has heard from farmers about complications with government subsidies where the IRS says a trust that owned land was a sham.

Is there any existing debt, and how will it be handled? Are taxes owed?

If taxes are involved, Swann says it’s a good idea to work with an accountant.

Forming an LLC can help with debt issues, Shanklin says, but the farmer and his family should consider what could happen in the future because an LLC may not always be the answer.

“A will is the minimum,” says Kolander. “In Texas if you die and have a farm, Texas laws govern how that farm passes to your heirs if there’s no will.”

Shanklin says farmers may want to look into going beyond the will, putting the land into an LLC or trust and removing it from the estate.

Do You Have A Plan?

All of this is why a farmer needs to know what he or she wants to do, communicate with family members if they will be involved and secure qualified legal assistance to help formulate a plan that fulfills the farmer’s wishes.

It’s important to hire an attorney who is familiar with any government programs and taxes that may affect the succession. And how do you pick the right one? These are things he or she should understand to make sure the succession plan is viable:

A farming operation is a business that often involves ownership property and family members. To make sure it continues to thrive in the future, don’t leave your succession plan to chance.

The McCleskey Law Firm in Lubbock, Texas, is a full-service practice with more than 90 years experience representing members of the farming community in and around West Texas, eastern New Mexico and Oklahoma. Terry Greenberg is principal of Greenberg Media Management, representing the firm. Contact him at green
bergmediamanagement.com.