It would be hard to find a more optimistic group than the Texas Cotton Ginners’ Association. Even with a drought again plaguing parts of the state, members remain cautiously hopeful about the chance for a good crop in 2014.

Such was the attitude when the industry organization met in Lubbock last month for its annual meeting and trade show. No matter where a visitor walked in the Lubbock Civic Center, a note of optimism was heard from ginners, equipment representatives and exhibitors. Nobody is ready to give up on the potential for an excellent cotton crop this year.

Specifically, it’s West Texas where the greatest need exists for timely rains. The southern part of the state is in much better shape and planted cotton on time earlier this year. 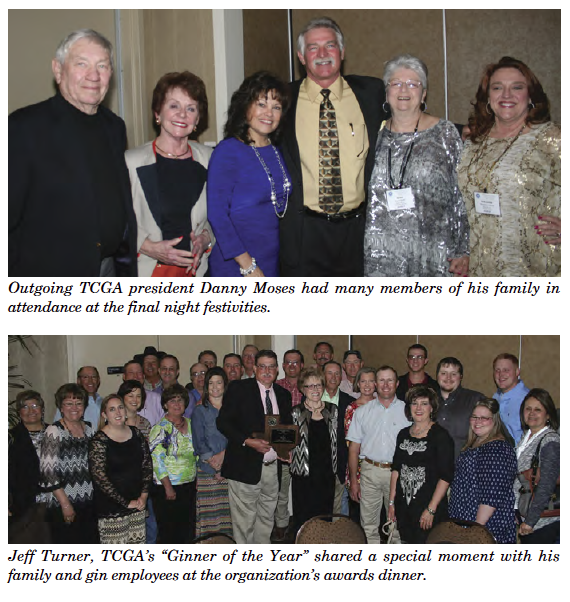 TCGA executive vice president Tony Williams echoes the feelings of many ginners that there is still time for the necessary rain. “The good news is that we’ve gotten some good rain in south Texas, and that region is ready to have a good crop,” he says. “Now, we need to take care of West Texas.” The window for planting will continue until the first week in June.

Williams, like many producers and ginners, monitors long-range weather patterns in Texas. He has seen the predictions of an El Niño pattern that could produce more rainfall this year. If such a trend were to occur, it would go a long way toward ending the current drought, which might be headed toward a fourth year.

Another positive sign for Texas ginners was attendance at the Southwest Ginners School in Lubbock last month. More than 150 students attended the school, which was held in conjuction with the TCGA trade show.

Several presentations were made at the awards dinner at the Overton Hotel. Buzz Cooper of Slaton was introduced as TCGA’s new president for 2014. Outgoing president Danny Moses of Wharton was honored for his year of service. Jeff Turner, manager of the Glasscock County Co-op Gin in St. Lawrence, was named “Ginner of the Year.”

Meanwhile, Cotton Farming magazine, co-sponsor of the TCGA Trade Show, contributed $7,500 to the Texas Tech/TCGA Scholarship Fund. The TCGA summer meeting is scheduled for June 22-24 at the Hyatt Lost Pines Resort located between Austin and Bastrop.