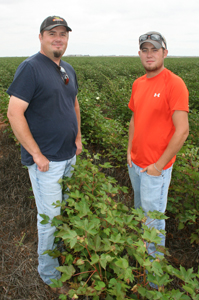 Rackler BrothersTo survive as a cotton farmer in the Hockley County area of West Texas takes stamina, perseverance and a lot of studying. No, this isn’t about preparing for a final exam in college. It’s about meticulously observing all aspects of a farming operation to
make smart business decisions for growing cotton.

Considering that the state is now in its third consecutive year of serious drought and West Texas has limited water resources creates even more of a challenge.

That’s the scenario facing brothers Jason and Brett Rackler, who are part of a fifth-generation family farming operation north of Levelland and west of Lubbock. Jason is 17 years older than Brett, but they work well as a team and are in partnership with their father Bobby.

The farm consists of 2,000 acres of cotton, and the Racklers try to be as efficient as possible by having drip irrigation, center pivots and dryland production.

“I don’t think people on the outside have an appreciation for how tough it is to grow cotton in Texas,” says Jason. “Sometimes I think we’re living in a bubble and preaching to the choir about our situation.”

Somehow, the Racklers have managed to receive enough timely rains to help the dryland acres. And they’ve tried to be efficient with their center pivots and drip irrigation. The end result is that they are looking at yields of two- to three-bale yields on the irrigated acres and close to a half bale on the dryland.

All of their cotton acreage is planted to four Deltapine varieties:

“These varieties have worked well for us, and its important that they are a good fit for this tough environment in West Texas,” says Jason.

The Racklers are always in search of a new way to be more efficient. That is why they have recently contemplated how to deal with nematode outbreaks in their area. When Temik left the market two years ago, they noticed increased nematode damage in their acreage.

They like the idea that new cotton varieties on the market today can offer help against nematodes as well as
resistant pigweed.

As for the water situation, the Racklers have about 350 acres of drip irrigation and will put in another 80 acres next year.

How can two brothers work together so well with such a big gap in their ages? Apparently, it’s all about respect. In their younger days, it was more of a problem. Now that Brett is 23, Jason is 40, and the communication works well.

“We are the only two kids in the family,” says Brett. “Farming is definitely in our blood, and we wouldn’t have it any other way. Our situation has worked out well.”

For the past year, Robert Ramirez has worked as a consultant for the Racklers, and he can attest to the success of the family’s operation.

As he likes to point out, how many farmers like to spend Sunday afternoons driving to nearby farms to observe how cotton is grown in other areas of West Texas?

That is precisely what the Rackler brothers do.

“Like I have often said, that’s what makes these farmers different from everybody else,” says Ramirez.