EDITOR’S NOTE – Stephen Biles is an Extension Integrated Pest Management agent based in Port Lavaca, Texas. In this report, he talks about the cotton insect situation in the Coastal Bend region of his state.

Right now our cotton on the Coastal Bend is in the squaring stage of development. At this point, the primary pest that we worry about the most is the cotton fleahopper. This is a traditional pest that you’ll find in the eastern and southern part of the state – and certainly more so than in the High Plains. It can still be a pest in West Texas but not every year. Here in our area this insect will cause very small squares to shed when it feeds on the plant. It is an economic problem for us when we have 15 fleahoppers on 100 plants. That is our economic threshold.

The main difficulty with fleahoppers is scouting for them. It’s a small insect. The adults are a quarter- inch in size. They can fly, and the immature fleahoppers can be as small as an aphid. This insect is also what you might call shy. It will move to the other side of the plant and try to get away from you. Fact is, they don’t like to be seen. 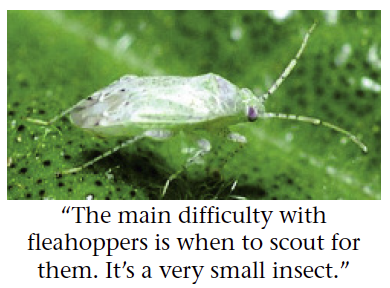 Difficulty In Scouting
The challenge for us is that it’s very tedious to go to the field and scout for them. They are a light green color and are not a whole lot different from the color of the plant. This insect is certainly nothing new for this part of Texas. For as long as I can remember, dating back to my days as a student at Texas A&M, this is the cotton insect we always scouted.

Once you get four or five fruiting sites on the plant, you start to worry about fruit loss from the fleahopper. So, that is one of the things that we have learned; when the plants only have two to three squares, the fleahopper will not cause economic loss. From an insecticide standpoint, we are still trying to figure out a few things such as how long some of the systemic insecticides stay in the plant.

At this stage of the game, we are also looking for aphids but aren’t finding many. Throughout most of the season, aphids can be another insect pest. These are the two insects that are of most concern to us in the squaring time frame.There are some similarities between fleahoppers and plant bugs in that they both feed on the squares. However, the fleahoppers are not going to cause too much damage once they get beyond the pinhead or match-head square size. In short, the fleahopper isn’t as damaging as the plant bug, and it is nowhere as difficult to control.

We try to stay informed about what is going on with the plant bug for a number of reasons. We are not immune to having them down here, but for some reason we don’t see them in the numbers that you’ll find in the Mid-South or Lubbock. It’s also important for entomologists here to stay plugged into what is happening in other regions. There is always the possibility of that triangle of the environment, insect and crop combining to cause an odd insect problem. It’s certainly a possibility that everything could come together, and we could have a lygus problem – maybe one year out of 15 or 20. It could happen, but I have never seen it.

Coastal Insect Pest
We do have another insect here on the coast that we deal with. It’s the verde plant bug. It’s been around for 10 to 15 years, but it’s closely associated with the coast to a degree. I don’t tend to find them more than 30 to 40 miles inland. Some insects thrive in different kinds of weather conditions. The fleahopper prefers some of the wild hosts over cotton. When turnrows and ditches are wet and we have some horsemint or evening primrose weeds, that is an environment the fleahopper likes. Then, when the weather warms up and those plants dry down, it will move on into cotton.

Ironically, some of the research we have done indicates that the fleahopper actually prefers the wild hosts over the cotton. And this seems to confirm what we’ve been seeing in the field. As far as this year’s crop, the main thing we are looking forward to is more rainfall. We received some last week, but the dry winter we had is going to require some repeated rainfall to bring us through the season. That will be a bigger issue than any of the insect challenges. I talked to a friend in Georgia, and he said they’d loan us some water. Seriously, it’s hard to believe how much rain the Mid-South and Southeast receive, and here we are in Texas dealing with the fourth year of a drought.