15 cotton season started off with a thump as most of the country’s key cotton-producing provinces experienced adverse weather conditions, which delayed planting. Despite the early setback, farmers were able to complete planting by the last half of May. This was supported by local USDA attaché reports, which noted, “the sowing campaign finished on time in most cotton growing regions, followed by normal rainfall during the planting season.”

However, roughly 15 to 20 percent of the total planted area required replanting due to localized storms in early April. As the growing season progressed, summer weather conditions were generally conducive, leaving locals upbeat on the outlook for the crop. Farmers in southern regions, however, did experience problems with irrigation water availability; but, as fall approached, it was clear that output and yields were positively affected by late summer weather conditions.

Cotton harvesting across the world’s sixth-largest producer of the fiber commenced en masse in early September with locals cautiously optimistic on harvest prospects. The Uzbek government’s official targets for planted area and seed cotton production this marketing year are set at 3.175 million acres and 15.3 million bales, respectively – unchanged from 2013/2014. 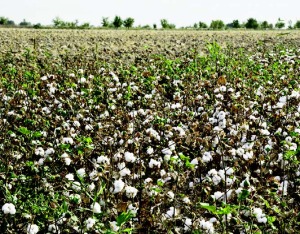 USDA remains steadfast in its outlook that the country will harvest 4.2 million bales this season – the second-largest crop in six years – and we see no reason to disagree with their numbers.

On the demand side, the country’s mills are set to consume a record amount of cotton this marketing year, while Uzbekistan ships fewer bales abroad. At 1.45 million bales, the latest USDA mill consumption forecast is set to expand for the sixth straight marketing year.

Indeed, the same USDA attaché has stated that over this period the local spinning and weaving sector has responded to strong domestic and export demand – especially for cotton yarn – by investing heavily in new equipment and the renovation of existing equipment.

Each year, new textile mills are being opened, often with foreign investors’ participation. At the same time, exports are expected to dwindle to 2.30 million bales in 2014/2015, the lowest since gaining independence more than 25 years ago.

Some attribute this to the government’s desire to process more Uzbek cotton production domestically, while others point to an avoidance of Uzbek cotton regarding earlier child labor concerns.

Regardless of the reason, the gradual evolution and consistent demand for Uzbek cotton is likely to continue in the coming crop years.

Contact Jim Lambert at jim.lambert@intlfcstone.com. Comments in this article are market commentary and are not to be construed as market advice.