Home » Special Report » Water In The West And Our Future

Water In The West And Our Future

I recently connected with the Sheely family of California and Arizona to talk about water in the west and some of the unique issues we face out here where the sagebrush and saguaro stand tall.

Ted Sheely is a lettuce, cotton, tomato, onions, wheat, wine grape, garlic and pistachio farmer in California’s San Joaquin Valley and is a board member of Global Farmer Network, a farming-advocacy nonprofit. Sheely is also the son-in-law of Cecil Miller, Arizona Farm Bureau president from 1971 to 1992.

In a July 29, 2015, commentary published in the Wall Street Journal, Sheely says, “We grow crops to feed people. We don’t consume water as much as invest it. Our return on investment is the food supply that benefits everyone, including reporters who wolf down takeout lunches at their desks inside the D.C. Beltway. Nobody eats delta smelt, by the way.” 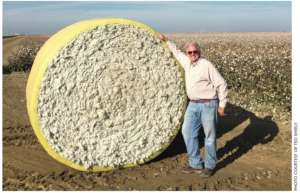 California cotton, vegetable, wine grape and tree nut producer farmer Ted Sheely says that the farmers’ excess use of water is a fabrication of environmentalists who want to disguise the fact that they “use” even more water than agriculture.

He went on to say that the “best long-term solution to California’s drought is to build more reservoirs, dams and desalination plants. We haven’t done enough of this in the recent past and we aren’t doing enough of it today.”

So, I knew Sheely would have some interesting insights for us and certainly give us an update on where California is with their water issues.

Arizona Agriculture: Because we can have pinpoint accuracy to our agriculture water application in the West, we can produce so much more per acre than anywhere else in the country.

How do we translate this truth to a public that’s skeptical of agriculture’s modern practices and especially its use of water?
Sheely: In California, we especially like to say that we grow more pounds of cotton or tomatoes or onions per acre-foot of applied water because of buried drip we use for irrigation. We in agriculture have to keep presenting the facts on water usage in the West not only to the press but to elected officials.

Because of costs, farmers maximize efficiencies. Instead of spraying water on fields, like a sprinkler does on a suburban lawn, I send it through an underground irrigation system. It trickles to precise locations beneath the soil. Rather than evaporate in the summer heat, it satisfies the needs of our plants and nothing else.

I have a huge economic incentive to conserve. When I started farming in the 1970s, an acre-foot of water cost about $8. Today, I pay an average of $2,500 per acre-foot.

Arizona Agriculture: Your 2015 article in the Wall Street Journal was an instructive piece on the deceptive nature of some environmentalists misuse of water.

Do we ever get to a place when we’ve overcome the propaganda perpetrated by some in this group?
Sheely: The environmental community continues the myth that agriculture in California uses 80 percent of the water. The actual number for California agriculture use is 40 percent. Urban or residential uses 1 percent and special environmental projects use 50 percent. I’m not against water for environmental reasons but the species that water is being taken for, the delta smelt and salmon, in the last two decades have shown “no” improvements in the species’ numbers. In 2017, 90 percent of all delta water flows to the ocean and 10 percent covers 100 percent of all agriculture and urban uses.
Excess water use by farmers is a fabrication of environmentalists who want to disguise that they “use” even more water than farmers.

Arizona Agriculture: Despite current challenges to western agriculture’s water issues, what can we get really excited about?
Sheely: Well, after the last three years in California of a 0 percent to 5 percent water allocation, going back to 100 percent allocation is wonderful. And, as a result of the last three critically dry years, the state of California is looking to build new storage facilities and funding. These are hopeful outcomes for our future. 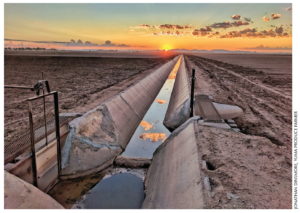 The use of managed, precise water application out West means yields per acre can be much higher than averages in other parts of the country.

Despite all this, the governor’s recent signature on the climate change bill will hurt agriculture in California. Our industry has reduced its carbon footprint, but we get no credit for the annual crops we grow. We do get some carbon credits for the permanent crops, like almonds and pistachios. However, our biggest concern going forward under these new regulations will be the time, effort and cost it will take to be in compliance with the climate change bill.

Watch what happens in California. If it rolls to the rest of the country, agriculture is in trouble.
We always have to remember the time and money it takes to be in compliance with new regulations. A horrible example is our air quality standards in California. For example, we have to water our roads during the drought. If we don’t, the fine is $10,000 per incident.

Arizona Agriculture: Is there a case for California and Arizona agriculture to work together more on the water issue? If so, how?
Sheely: Arizona and California must work together to keep reminding consumers that the water agriculture uses in food and fiber production is ultimately being used by them, the consumers. They have to be reminded no matter where their food and fiber comes from it takes water to produce these crops.
The engagement with consumers, to me, is as important as any lobbying and work we might be doing with lawmakers.

Arizona Agriculture: What modern technology will do the most to help us with our water issues out west?
Sheely: I believe in the next 10 years that the transgenic drought-tolerant seed varieties hold the most promise for improving agriculture yields with less water use. Growing more per acre with even less water seems impossible, but it becomes possible because of biotechnology.

Arizona Agriculture: What are your predictions about the future of agriculture?
Sheely: People cannot stop eating nor will they give up wearing natural fibers for clothing. The future is bright for agriculture. That being said, the affordability of food and fiber, I think, will continue to be a major factor in future years, especially for developing countries that are unable to produce the supplies of food that the United States is able to do.

In California, we enjoy the larger number of crops that can be grown here. But Arizona and California combined are the top producers of all the leafy greens the rest of America enjoys 365 days out of the year. Without these two states, Americans wouldn’t be eating the amount of leafy greens we enjoy.

Arizona Agriculture: The outlook for the cotton crop for the 2017 season looks promising. Talk a little about this. What’s making the outlook more positive than in recent years?
Sheely: The 2017 California cotton crop looks to be a great crop of Upland and Pima varieties. The availability of higher quality surface water, higher consumption numbers and potentially lower carryovers, equate to more stable to upward prices. Continuing good weather through October would increase yields.

My wife and I look to what each young man or woman enjoys doing and encourage them into that segment and hope they get as much enjoyment in what they do that we have had.