Those attending Monsanto’s annual field day recently in Union City, Tennessee, enjoyed moderate temperatures, which are unusual for the dog days of summer. Company and university personnel primarily addressed cotton topics — including products and traits, weed resistance and new technology — along with information on soybeans and corn.

Scott Stewart, IPM Extension specialist, University of Tennessee, says the level of bollworm injury on Bollgard II and WideStrike cotton varieties is higher than we are used to seeing. Bollworm populations are beginning to develop some levels of resistance to Bt toxins currently available in cotton and corn. Compounding the problem is that bollworm resistance to pyrethroid insecticides is getting worse.

As far as “good news,” Stewart says new technology — Bollgard 3 and WideStrike 3 — does provide better control. Both express the protein Vip3A, which provides another mode of action for caterpillar control.

However, he cautions farmers “not to assume anything in this business. We have to be more aware, more aggressive and better worm scouts. If you get enough worm pressure, it is possible you will have to make an insecticide application on even the newer Bt technologies.”

The Bt Lygus Trait
Stewart is also working with the new Bt lygus trait, which is intended to help control tarnished plant bug but is still a few years down the road.

“We are seeing plant protection and a reduction in plant bug numbers, but insecticides are still needed to control tarnished plant bug,” he says. “However, we have not had to spray it as much as cotton that doesn’t contain the trait. The Bt lygus trait won’t be a no-spray technology for plant bugs, but it will help.”

The Tennessee entomologist also notes that in his experience, the Bt lygus trait technology has provided very good thrips control similar to or better than the “best competitive standard we could put it up against.”

Managing Weed Resistance
In a team presentation, Monsanto’s John Willis and Garrett Montgomery discussed managing weed resistance. They said this effort will help farmers remain sustainable and make use of durable weed control programs to keep effective technology around in a long-term scenario. 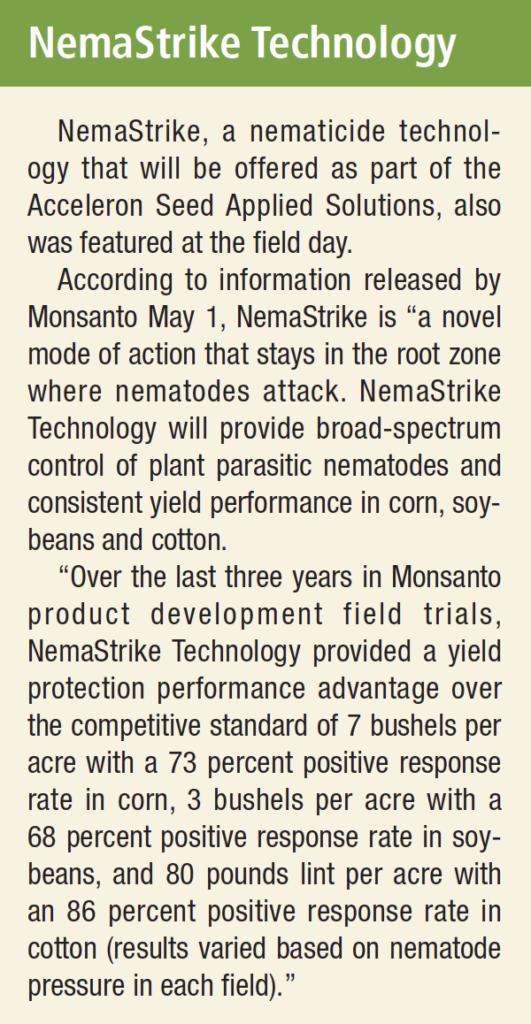 Here are some tips they offered.

If there is even one weed in the field (particularly pigweed), don’t harvest through it because you don’t know if it is resistant. One female pigweed plant produces about 500,000 seeds. Harvesting through that plant will only increase the weed population. Stop, cut it down or pull it up.

“Whether you are using Monsanto’s system or something else, remember it’s a numbers game,” Montgomery says. “The more management practices you can incorporate into your weed control strategy to make your system last longer, the more money you will ultimately save.”

Willis also made an important announcement regarding Monsanto’s Roundup Ready PLUS Program. For each additional mode of action a farmer selects from the approved product list, Monsanto will increase the rebate to higher levels.

The informative morning wrapped up with a complimentary lunch catered by Strawberry’s Barbecue Restaurant in Holcomb, Missouri — always a crowd favorite!