Large-scale solar energy use on Western cotton farms has been slow on the uptake. However, cotton ginners in the West have begun looking at solar energy options to help cut electrical costs during ginning season.

Nationwide, energy providers are under mandates to increase energy sources that are an alternative to fossil fuels. Incentives for energy-producing infrastructure can sound inviting, but careful consideration of cost, as well as maintenance and operation, must be considered.

Ron Nimmo, gin manager at Pacific Ginning Company in Firebaugh, Calif., believes cotton gins and solar energy are a great partnership. “It’s one of the most perfect operations to install solar,” says Nimmo.

Most cotton gins run during the cooler times of the year, therefore the operations are able to take advantage of lower electrical rates. During the summer, when demand is high and gins are not operating, solar is generating energy at the most efficient time. In theory, a cotton gin should be able to store energy credits generated during peak solar production and use those credits to pay for energy during the ginning season.

Two cotton gins in California, County Line in Hanford and West Island Cotton Growers in Lemoore, are doing just that.

Tom Pires, gin manager at West Island Cotton Growers, says that he is waiting to see how much he will save after the first year of ginning with the solar panels in place.

“We haven’t received a bill all season,” he says. He believes the energy credits he earned during the hot summer months will cover the cost of electricity he used during this past season.

Pires and his board of directors made the decision to generate solar power based on personal experience. He has used solar panels to generate electric power on shallow irrigation wells on his own farm.

“It made financial sense,” Pires says about the cost savings he is realizing on his farm. So, he and his board decided to explore the solar opportunity at the gin.

Pires points out that cotton gins are good sites for energy generation given the infrastructure already in place to handle large volumes of electricity in season. That infrastructure is only used a few months out of the year.

Other advantages include abundant open space on the property and low activity during the down months.

The board of directors at County Line Gin made the decision to put in the system in 2012. Gin manager Brandon LaMattino was hired in 2013 after the installation.

“I think it was a wise investment for the gin,” he says.

In the long term, the gin hopes to pay off the installation cost in several years. By that time, energy costs would be a wash. 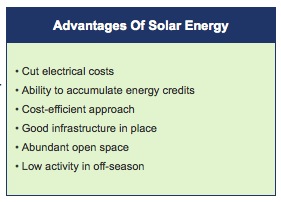 “You don’t want to over produce,” says Nimmo. Since the energy companies only pay pennies on the dollar for over produced energy, it would be a waste of resources.

Nimmo believes an installation should conservatively take only four or five years to pay for itself with tax and energy credits, as well as state rebates. With life expectancy of equipment between 15 and 25 years, savings would be realized even as new technologies advance.

Brent Murphree is the Cotton Board’s Regional Communication Manager for the West and resides in Maricopa, Ariz. Interested parties may contact him by phone at (602) 810-1171 or via email at bmurphree@cottonboard.com.