Timing is everything in the cotton industry. Whether it’s growing or selling the crop or launching a career, it’s all about the calendar. And that is certainly the case for a young Californian named Stephen Harmer, who recently graduated from the International Cotton Institute in Memphis, Tenn. 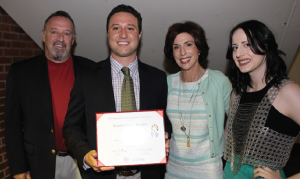 More than a year ago, he earned a degree from the University of California-San Luis Obispo in wine and viticulture and thought he was headed for a career in that industry. It seemed like the right choice at the time. Then, his parents encouraged him to consider another offer from a cotton company in Bakersfield, Calif. It seems that the Jess Smith & Sons Cotton Company was looking for someone to hire, and Stephen’s name was passed along as a potential candidate for a job as a trader.

After much discussion with his parents, he finally relented and decided to interview with the company – even though his knowledge of cotton was limited. It turned out to be a life-changing decision for Stephen. He was offered a position, fell in love with cotton and hasn’t looked back.

Rare Opportunity In Cotton
He quickly settled into being a trader with the company, and his boss decided it would be advantageous if he participated in the International Cotton Institute in Memphis. The school would increase his contacts in the global cotton industry, while helping him learn more about all aspects of cotton. And, in a bit of irony, company owner Ernie Schroeder Jr. had participated in this same class in 1995, the International Cotton Institute’s first year.

“It’s hard to put into words how I feel about being a part of the cotton industry,” says Stephen after graduating from the cotton school in July. “I learned a lot when I first started working at Jess Smith & Sons. But, this experience in Memphis just took it to a different level.” For the past year, he has bought and sold cotton from all over the world, but the chance to participate in the cotton school in Memphis was too attractive to turn down. He embraced the opportunity and graduated with distinction. He also won the cotton essay contest that is conducted each year for students in the class.

Perhaps the proudest persons at the graduation event at the University of Memphis were his parents, Kenny and Marianne Harmer, and sister Bianca. They made the trip from California and were beaming with pride. “It’s just been a dream for everybody,” says Stephen’s father. “Being here to see this makes all of us very proud. The cotton industry is one big family, and Stephen has learned so much. We’ll never forget this day.”