It’s Time To Prepare For Defoliation 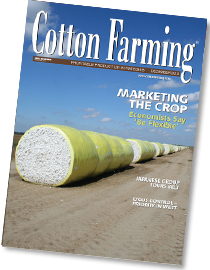 At this time, our cotton is about two weeks behind our normal development. Much of the cotton growing area has had about six inches of rain or more within the last month, with most of it coming in two weeks. We normally refer to the July and August rains as “million dollar” rains because it helps revive the non-irrigated cotton, and it lowers irrigation costs. However, it could hurt some of the cotton on the poorly drained soils. We will need to look at nitrogen, sulphur and potassium as we go forward.

Some of the cotton is reacting to the shock of extra water by shedding squares and small bolls. Our temperatures are lower, and we haven’t had much sunshine. If you look at our DD-60s, from May 1 through Aug. 1, we have had 1,435 heat units. This is less than the 1,624 for the same period last year and 1,732 in 2011. However, a record yield occurred in 2008 with 1,106 pounds per acre, and we only had 1,114 heat units at this time of year. We have had cooler weather due to the fronts bringing in the rain.

We have been spraying for plant bugs and our moth counts are picking up as we approach the end of the season. We are in desperate need of plant growth regulators to slow the crop down, but they must be applied by air. It’s hard to apply chemicals during windy and rainy conditions.

SPRINT TO THE FINISH LINE

With conditions turning extremely hot and dry in late July through much of August, the Louisiana cotton crop made a dash into September with many fields with open bolls in the lower canopy. By the time this article is printed, we should have defoliants going out. Through late July and into August, a variety of species of leaf spots have hastened leaf deterioration and drop in some cases, while fungicide applications have gone out to prevent defoliation over a sizable number of cotton acres.

At least some of these leaf spot diseases appeared to be more common in certain varieties, but depending on the situation and variety in question, most, if not all, may contract one or another of these diseases. Potassium deficiency, while evident for the most part, did not appear to affect as many acres as in recent years. Plant bugs continued to plague producers until the end but were not overwhelming or extremely difficult to manage. Spider mites made a late run in mid-August, and treatable numbers of stinkbugs have been a sporadic problem.

Many of the cotton varieties being grown in Louisiana in 2013 grow aggressively, and the tall crop height reflects that despite PGR use. With this in mind, we need to stay cognizant of the potential for late season hardlock and boll rot issues. Overall, the crop looks pretty good going into defoliation. It’s not necessarily a bumper crop, but I’m predicting a better-than-average one.

Many farmers were still making management decisions in late August on a lot of this year’s cotton crop. The long wet period in June, July and August made it difficult for producers to get cotton planted timely – especially double-cropped cotton. Growth was further slowed by water logged soils and delays in fertilizer application.

Cotton is sure to be late and in some cases may be damaged by frost prior to opening if it stays on the current schedule. There are some good fields of cotton planted early that will be on a normal schedule with many others that will need a late fall for the cotton to mature.

September is a key month for much of the Deep South cotton crop since there needs to be adequate rain along with sunshine to finish out the crop, and we will still be setting fruit through the first part of September. We normally think of rain as a good thing, but it can result in delayed practices that result in lower yields. Producers are accustomed to making decisions based on weather and are doing well with the conditions that they have encountered this year.

As of Aug. 14, I am hearing average to slightly above average yields for irrigated producers in the Rio Grande Valley, and harvest has progressed quickly due to the limited acres in the region. The Upper Gulf Coast began to defoliate some of its cotton this week. Yield potential is highly variable depending on the scattered showers within this region.

In the Blacklands, the dryland cotton fields matured very quickly due to insufficient moisture and high temperatures in the past few weeks. Some of the earliest planted dryland cotton fields will be defoliated in the next few days; however, non-uniform fields are making defoliation decisions tougher for producers.

Producers need to keep in mind this last effective bloom date when making input decisions and do their best to maintain high fruit retention.

As of mid-August, surprisingly many areas of Georgia’s Cotton Belt began to dry out, despite excessive rains nearly all summer long. Rains subsided during early August, and by mid-August, many fields were severely wilted by mid-morning, likely due to the shallow and poor root systems and a heavy vegetative load in earlier planted cotton. Several center pivots were running fairly hard during that time.

As I write this on Aug. 15, we’ve had some widespread rain return in the past couple of days, but most reported amounts were not excessive. We will see what the rest of the season holds.

As of now, the crop remains variable. The early planted cotton looks pretty good, and later planted cotton has generally struggled due to late planting, late or no side-dressing or waterlogging. Some later planted fields have perked up a little bit due to recent sunshine, but some of the late-planted crop has a long way to go. Hopefully, a sunny, warm fall with some moisture will make the best of this crop.

THE BEGINNING OF THE END

Defoliation applications are generally made when the crop is 60 percent open; however, many have a tendency to underestimate percent open bolls in a given field. To alleviate this, a sharp knife is often used to cut bolls and determine if they are fully mature. Using a combination of these techniques can help more precisely time applications.

In addition, everyone knows that most of the products we use to remove leaves are temperature sensitive. To that end, be sure that you adjust your product and/or rate selection to match the environmental conditions at the time of application. Applying the proper products and rates as soon as possible may save a few headaches at the back end of the harvest season.

On the other hand, due to the lateness of this crop, we will probably need to rely pretty heavily on boll openers. They work best in warm weather, and we will likely need to use high rates due to cooler weather at the time of application. This crop was set over a relatively short period of time and covers fewer nodes than a normal crop. This means that we will likely be able to defoliate at a lower percent open bolls if this crop continues to mature at the current rate.

Focusing on nodes above cracked boll and cutting bolls to look at seed development will help us get in and defoliate this cotton as early as possible and hopefully be able to apply defoliants before weather conditions deteriorate too much.

WHERE IS THE HEAT?

Much of the northern Alabama cotton crop has made a lot of progress during the last two weeks despite much cooler August temperatures than normal. Despite this, the cotton is still behind schedule, and we will be depending on some late August blooms to mature to have a good crop.

Some years we can mature these late bolls and other years we run out of heat and time. A good, hot September would really help this year. Generally, insect pressure has been light, and farmers have applied growth regulators to keep the cotton height in check. Our next big challenge could very well be, “when and how to defoliate and harvest this cotton crop?”

Currently in the Texas High Plains and Panhandle regions, 50 percent of the 3.7 million acres that were planted remain. These remaining acres are in various stages of growth and conditions. I have observed, however, that with the high, but not oppressive (only six, one and three days above 100 degrees in June, July and August so far, respectively) daytime temperatures and relatively normal night temperatures, many fields are progressing toward cutout fairly rapidly.

When compared to 2011 (39 days above 100 degrees) and 2012 (20 days above 100 degrees) for the same time period, 2013 has had significantly fewer (10) days above 100 degrees, which has allowed, in my opinion, some of these fields to develop at near optimal rates. This is fortunate considering the difficulties observed during the early part of the season that put the crop 10 to 14 days behind. These temperatures, recent precipitation events and generally low insect pressures have resulted in high first and second position fruit retention, providing an opportunity for the region to observe higher yields than what would have been predicted earlier in the season.

Generally, the last effective bloom date for a harvestable boll in the Lubbock south region is Aug. 20-25. Under normal conditions, it takes approximately 850 to 950 heat units for a bloom to reach full maturity. Bolls with lower maturity may still contribute to yield but will likely be of poor quality.

A good open fall with continued warm temperatures through September will be needed for the blooms we are seeing today to reach full maturity. Finally, as we approach the end of the growing season, producers should continue to monitor fields closely for insects and prevent any undue moisture stress to maintain the current fruit loads. Small bolls are sensitive to heat and moisture stress during the first 10 to 14 days after bloom. After that, insects should continue to be monitored until bolls have become “insect-proof.”