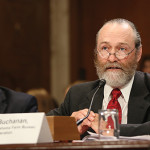 On April 12, Oklahoma Farm Bureau President Tom Buchanan urged Congress to hold the Environmental Protection Agency accountable for its burdensome regulations and aggressive tactics against U.S. farmers and ranchers. In testifying before the Senate Environment and Public Works Subcommittee on Superfund, Waste Management and Regulatory Oversight, Buchanan explained how Oklahoma’s farmers and ranchers are affected by the EPA’s regulations, especially its Waters of the United States rule. “After carefully studying the proposed rule, we at Farm Bureau concluded that the rule’s vague and broad language would define ‘waters of the United States’ to include countless land areas that are common in and around farm fields and ranches across the countryside. These are areas that don’t look a bit like water,” Buchanan said in his testimony. “They look like land, and they are farmed, but by defining them as ‘waters of the U.S.’ the rule would make it illegal to farm, build a fence, cut trees, build a house, or do most anything else there without first asking permission of the federal government and navigating a costly and complex permitting regime.” Buchanan also highlighted EPA’s misleading advocacy for its own rule, using public relations and social media campaigns to garner support. END_OF_DOCUMENT_TOKEN_TO_BE_REPLACED

New pesticide regulations issued by the U.S. Environmental Protection Agency (EPA) mean state regulations will need to change to harmonize with the federal rules – but in California, observers expect those changes to be relatively minor. Planting CottonEPA announced revised Agricultural Worker Protection Standard regulations in what it described as an effort to reduce risks of injury and illness for ag workers and chemical handlers who use and come into contact with the products at farms, forests, nurseries and greenhouses. The federal regulations will take effect in 14 months, revising rules originally issued in 1992. But many of the regulations already apply in California. Bryan Little, California Farm Bureau Federation director of employment policy and chief operating officer of the Farm Employers Labor Service, monitored development of the original EPA rules and later revisions when he was employed by the American Farm Bureau Federation (AFBF). “When I came to California a few years ago, I found that we already had regulations on the books that went way beyond the federal standards,” Little says. “The current administration in Washington, D.C., has decided to beef up the federal standards. In the process, the EPA has made the new federal standards very similar to the California standard and the Washington state standard, which is similar to ours.” END_OF_DOCUMENT_TOKEN_TO_BE_REPLACED 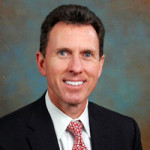 What is the primary concern? The World Trade Organization (WTO) failed to meet the July 31, 2015 deadline to agree on a work program for the WTO Ministerial scheduled for Nairobi, Kenya in December. However, there have been repeated comments from numerous countries and WTO officials for there to be “something more” done on cotton policy at this meeting. Thus, the NCC has engaged with U.S. trade officials at the WTO in Geneva and in Washington, as well as with Congress, to ensure U.S. trade negotiators maintain a firm commitment not to accept any further restrictions on U.S. cotton policy. Did you testify before Congress? Gary Adams testifies NCC President/CEO Gary Adams testified that other countries’ agriculture and trade policies threaten U.S. cotton’s viability. In mid-October, I testified at a House Agriculture Committee hearing on “Foreign Subsidies: Jeopardizing Free Trade and Harming American Farmers.” The Committee wanted to further explore the trade-distorting tools that some countries are using and the detrimental impact on American farmers. I told the Committee that U.S. cotton farmers are indeed competing with international farmers who are benefitting from higher support levels. I cited a recent International Cotton Advisory Committee report that estimated average direct assistance to cotton production across all countries at $0.26 per pound – but only $0.07 per pound average support for U.S. cotton production. The NCC opposes any efforts to further limit U.S. cotton policy in the WTO’s upcoming Ministerial. END_OF_DOCUMENT_TOKEN_TO_BE_REPLACED 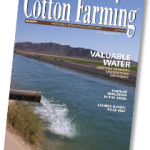 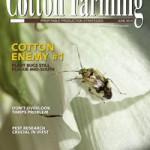 There seems to be a never-ending list of government proposals that would make routine agricultural practices difficult or impossible to perform – and the latest from two federal agencies could bring a raft of new requirements aimed squarely at California family farmers and ranchers. On April 21, the U.S. Environmental Protection Agency and the U.S. Army Corps of Engineers released ... END_OF_DOCUMENT_TOKEN_TO_BE_REPLACED

Nothing puts my mind at ease quite like driving a little stretch of highway between Slaton and Lubbock, Texas, on US 84. Ten miles of unencumbered highway marked by an endless horizon and, when in season, a pearlescent ocean of cotton. God’s Country, as I refer to it; these fields roll on as if trying to find the edges of ... END_OF_DOCUMENT_TOKEN_TO_BE_REPLACED