When it comes to optimism about a new crop season, nobody exudes a positive attitude better than Texas cotton producers and ginners. Yes, the state is still in the midst of a three-year drought, but there are some encouraging signs as everyone prepares for 2014.

Tony Williams, executive vice president of the Texas Cotton Ginners’ Association, believes that conditions are much better across the state with most regions having received timely rainfall during the past year.

“We have restored some of the moisture profiles in certain areas,” he says. “But we need more moisture before planting begins.”

Predicting how the 2014 crop season will turn out for Texas cotton producers is an inexact science, but Williams says there is reason for feeling better about the outlook.

By the time the Texas Cotton Ginners’ Association conducts its annual meeting and trade show on April 3-4 in Lubbock, Texas, he says everyone will have a better idea of what to expect.

Although having enough moisture to produce a cotton crop is always a major concern in Texas, Williams says other factors need to be monitored.

For example, there is still the question of how China will dispose of its huge cotton reserves, which total about 58 million bales. Grain prices also will have a potential impact on Texas cotton – especially if corn prices remain in the four-dollar range.

Another factor that encourages Williams is the recent announcement that no boll weevil has been captured outside the Rio Grande Valley during the past year.

“Keeping the boll weevil pinned up in the Valley is very important for our industry,” he says. “I also think it is significant that the rest of the U.S. cotton industry is trying to help this Texas region deal with the boll weevil problem there.”

Another reason for optimism are the remarkable success stories in 2013. In parts of the High Plains, some producers delivered four-bale yields last year – mainly because of timely rains, available water and high-performing varieties. So, if those yields can occur in a drought-stricken year, why can’t they be duplicated this year?

Williams believes if these areas can receive enough moisture, it’s possible that a larger crop can be produced in the state. With six million acres planted to cotton, he can see a potential jump in yields if “everything falls into place.”

Overall, Williams says the mood of ginners is better because additional rainfall has increased soil moisture profiles – meaning that producers can make plans for planting a crop. And, if producers in areas such as south Texas are that confident, it means ginners can’t be far behind in their planning.

“I think there are some real opportunities for a crop being planted and harvested in south Texas,” he says. “That area needs to make a crop.” 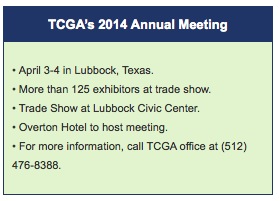 A key issue that Texas ginners will be facing is the increased use of round module strippers. Williams says that a limited number of these strippers will be available in 2014, but a dramatic increase might occur in 2015. In West Texas, he says it’s possible that more than half of the crop will be harvested in round modules.

While the ginning industry has worked closely with John Deere on the proper handling of round modules, TCGA will continue to emphasize ways to prevent contamination in those modules.

All of the aforementioned issues will be on the minds of TCGA members when they meet in Lubbock in April.

“As usual, we’ll have plenty to talk about at our meeting, and attendees can also learn a lot by visiting the trade show,” says Williams.