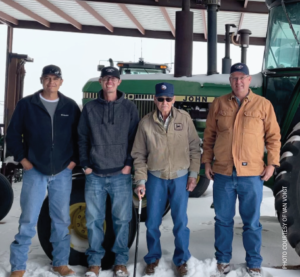 Van Voigt farms mostly dryland cotton in Lynn and Garza counties in the South High Plains of Texas with his father, Harold, and his son, Kyle. They all bring something to the table and pool their talents when it comes to producing a successful crop.

Since groundwater is a scarce commodity in this area, the Voigts decided to install drip irrigation on one of their fields about eight years ago. During the first growing season using the new system, Harold’s eagle eye spotted a problem.

“There’s something wrong with the cotton in that corner over there,” he said.

Van remembers running the cotton stripper across the field three years later and dumping five times. Then he turned around and went from one end to the other on the next set of rows and never dumped.

“We asked our Simplot representative, Nathan King, to take a look because we didn’t know what was going on,” Van says. “He put us in contact with PhytoGen Cotton Development Specialist Ken Legé, who came out to the field, ran a lot of soil tests and found that we had reniform nematodes. I had never heard of a reniform nematode, but some of our farming practices were spreading them everywhere.

“The reniform nematodes had started in the corner of the field that caught my dad’s eye earlier. We were farming conventionally, so we would chisel across the row and move dirt from one area to another. And we weren’t cleaning our equipment before we would run to another field because we didn’t know any better.”

Today, the West Texas farmers have switched to no-till and plant into a cover crop. They don’t disturb the field again except to run the spray rig and the stripper to avoid moving the nematodes from one field to another.

Yield Doubled, Nematode Numbers Declined
The Voigts have worked with Legé for the past five years to try to get rid of their reniform nematode problem. He educated them about the pest and conducted variety trials in a test plot on the irrigated field where the reniform nematodes first showed up.

In 2020, Legé had five different varieties in the test plot. The susceptible variety — like one they would normally plant — only made 750 pounds to the acre. The reniform-resistant variety — now available as PhytoGen® brand PHY 443 W3FE — made 1,450 pounds per acre on the very next row.

“This shows you how mean those nematodes are,” Van says. “And the loan on the reniform-resistant variety was 56.5 cents. We were tickled with that. It’s also a big deal to me for the variety to be resistant to bacterial blight. You can wear out a pair of boots going back and forth trying to decide if the infected plants are going to live or not. That time of year, we need to be moving on to the next job instead of worrying about bacterial blight.

“If it weren’t for PhytoGen and Ken Legé, that irrigated field would be planted to something else because you can’t be in the cotton business and survive on 750-pound-per-acre irrigated cotton. Another benefit to the PhytoGen reniform- resistant variety is our nematode numbers are going way down. We hope one day we will be nematode-free again.

“I think PhytoGen really has something with PHY 443 W3FE. It should get this reniform nematode problem whipped, so nobody else has to go through the learning curve we did.”