Home » Viewpoint » Hurricane Harvey Is No Match For Texas Grit

Hurricane Harvey Is No Match For Texas Grit 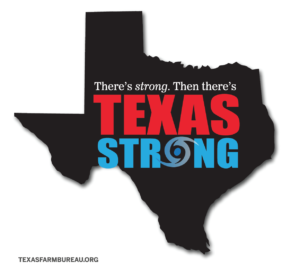 A challenge brings out the best in us, but a horrific natural disaster shows everyone just how strong they truly are. And here in the Lone Star State, we made a new category — Texas Strong.

The heart, resilience and spirit of Texas, and of our farmers and ranchers, is second to none. We showed the world what makes Texas so great — our grit and our people.

But another story emerged. One of selflessness.

Farmers and ranchers from across the state and country sent aid to the Gulf Coast communities. Livestock feed, truckloads of hay, pet food and toiletries came pouring in. Some drove a few miles with supplies. Others drove 500 or more, and still others crossed state lines to help.

Boats, helicopters, horses and people on foot moved stranded cattle to higher ground. They helped each other evacuate. And they moved from one farm to the next, lending a hand, a tractor or a boat.
The willingness to help isn’t new. We saw it after the wildfires roared through the Texas Panhandle earlier this year. It’s because agriculture has a bond. We’re all connected — doing what’s best for our crops and livestock, no matter the challenge.

Agriculture’s Determination
Now, (on Sept. 7) nearly two weeks after the storm made landfall, Texas farmers and ranchers are still sorting through the rubble, searching for remnants of their lives.

The determination that’s so engrained in agriculture, though, has our state’s farmers and ranchers getting back in the fields, trying to salvage what’s left of their crops.

Although we don’t know the full extent of the damage caused by Harvey, we do know the losses will be staggering. It’s part of the gamble we take as farmers, and Mother Nature holds the cards.

We’ve seen our neighbors, both near and far, bring needed supplies. But we’ve also seen monetary donations being made to our Texas Farm Bureau Hurricane Harvey Relief Fund for agriculture. One hundred percent of those donations will be dispersed to farmers and ranchers in the counties that have been designated as disaster areas by the federal government.
The storm of a century, as some call it, won’t keep us down. We’ll weather this together and come out stronger.
We are Texas after all.