This event raised more than $850,000 for the Ag One Foundation 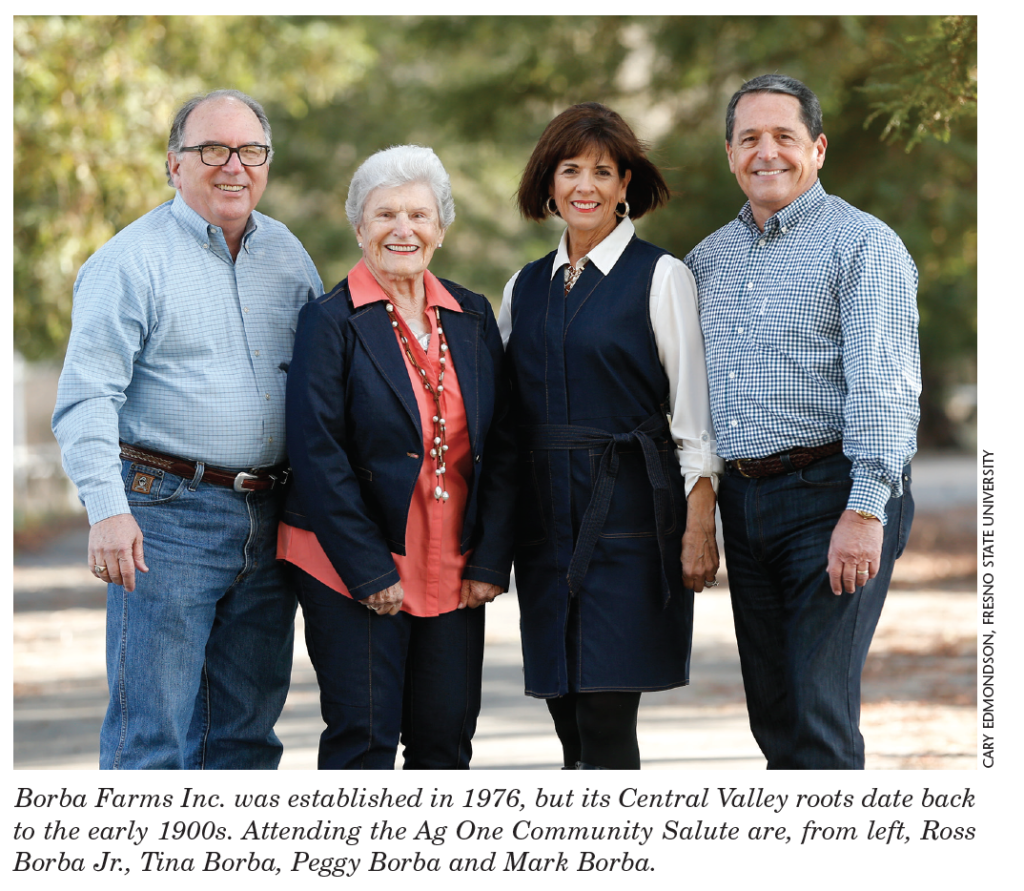 The Borba Family, longtime leaders in Central Valley agriculture, were honored at the Ag One Community Salute at the Fresno Convention Center Exhibit Hall.

The event’s 18th edition is the first to honor a family and recognized third-generation member Tina Borba and her sons, Ross, Jr. and Mark, as well as Mark’s wife Peggy Brown-Borba.

Tina served as a partner and bookkeeper in the early operations of Borba Farms. Ross Jr. provides legal and accounting advice while Mark and Peggy oversee operations and provide guidance to the fifth generation — their son Derek and his wife Jennifer — who operate the farming and custom farm management operation.

The family was also presented with a painting of Tina and her late husband Ross Borba Sr. that was created by David Hembree, Fresno State director of development for student affairs and enrollment management.

The Dean for the Fresno State Jordan College of Agricultural Science and Technology (JCAST) Dr. Sandra Witte says, “The Jordan College is so fortunate to have the Borba family’s commitment to supporting the next generation of agriculture industry and community leaders. It was such a wonderful evening for such a deserving family.”

Deep Roots In Agriculture
Borba Farms Inc. was established in 1976, but its Central Valley roots date back to the early 1900s when A.J. Borba started a family dairy near Hardwick with 40 cows and 120 acres, and then moved it to Riverdale in the 1940s. Today’s 9,000-acre operation grows almonds, tomatoes, garlic, melons, lettuce, wheat and cotton at the Rancho Vista del Rio horse ranch near Fresno.

Mark Borba is a long time board member and former Chairman of the California Cotton Growers Association.
This event honoring the Borba Family raised over $850,000 for the Ag One Foundation. Since 1987, the Community Salute has honored extraordinary individuals for their devoted service to California agriculture as well as their unwavering commitment to the community.

The California Cotton Ginners and Growers Association provided information for this article.