We always hear the phrase that every cotton harvest is somehow different from all the ones that occurred in the past. After observing conditions in many parts of the Belt this year, I’d say that this was definitely a season for the history books – regardless of what yield numbers might reveal. From Texas to the Carolinas, I don’t think I can recall a more varied reaction from producers when asked how harvest had proceeded this year.

As we were moving into the first part of October, it was debatable the kind of harvest that Texas would eventually have. The Rio Grande Valley, which has an earlier crop than the rest of the state, was able to deliver cotton for the first time in several years because of good moisture levels throughout most of the growing season. That was some of the best news I heard coming out of Texas.

A challenging situation occurred in the High Plains where excessive rains hit at the worst possible time in late September. Some early planted cotton took the brunt of that weather event. However, it appears that parts of this region survived cool and overcast skies. Heat units eventually did materialize, and I saw some reports of excellent cotton yields around Lubbock. 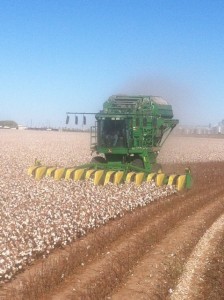 Perhaps the most heartbreaking report I received occurred in parts of eastern and northeastern Arkansas where a hailstorm and heavy storms decimated some open boll cotton. The Mississippi and Craighead counties of Arkansas lost an estimated 24,000 acres of cotton. Our friend Bill Robertson, Arkansas Extension cotton specialist, says the untimely weather turned a potentially good crop into an average one across the state.

When I viewed the pictures of the devastation, it was heartbreaking to know how much effort had gone into that crop – only to have it wiped out in a matter of hours. Most farmers will tell you that when this kind of traumatic event occurs, it’s best to salvage what you can from the crop and get ready for next year.

I couldn’t talk about the Arkansas cotton crop without mentioning Sam Stuckey, who has done everything he could to protect his crop in Crittenden County just across the Mississippi River from Memphis. Sam’s cotton withstood a lot of rain in June and part of July, and then he dodged hailstorms and heavy rains this fall. If you ever want to know how to survive untimely weather during a crop season, go visit Sam. As you’ll recall, he was on the cover of our August issue of Cotton Farming. The theme of that story was about the resilience of his crop – an appropriate title, for sure.

Finally, I have to say something about the cotton that I recently observed in northeastern North Carolina. I was in that area talking to farmers and observing harvest, and I must say that this region is remarkable. All of the cotton production is dryland, which is certainly a limiting factor. Irrigation is impossible to implement because of salt levels in the groundwater. Surface water sources also are limited. So, farmers here depend on timely rains and excellent performing varieties to deliver top quality cotton.

Would you believe that I saw yields between 3.5 and 4 bales per acre? I could hardly believe what I was seeing. On the flip side, these farmers must also prepare for tropical storms and hurricanes in the fall. This year, the Atlantic Ocean was relatively calm, and harvest has proceeded without a problem. But, it is a constant threat in the fall, and farmers often don’t get much warning when a hurricane approaches. It simply comes with the territory when you farm in the northeast corner of North Carolina.

The take-home message here is simple. No matter what kind of weather events occurred in various parts of the Cotton Belt this fall, farmers showed amazing flexibility in dealing with these challenges. Even when they were dealt traumatic losses, they talked about the future rather than dwelling too much on what happened to their crops this fall.

As we look ahead to 2015, let’s hope that we’ll have better prices and the prospect of excellent growing conditions across the Belt. Much like a coach trying to guide a football team, a farmer merely wants the chance to compete. Nothing more. Nothing less.