Clemson agriculture experts provide post-hurricane updates from around the state

CLEMSON — Hurricane Matthew, which crushed the Caribbean and then blasted the coast of the United States from Florida to North Carolina, certainly took no pity on South Carolina during its relentless march. 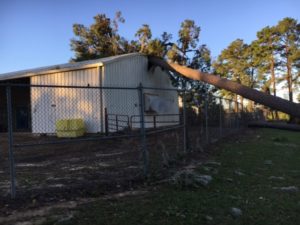 Though the extent of the long-lived hurricane’s damage is yet to be determined, tens of thousands of acres of cotton, peanuts, soybeans, turnips, brassicas, collards and spinach all took significant beatings. To make matters worse, hundreds of trees fell onto power lines, knocking out power to almost a million homes, farms and businesses, according to S.C. emergency officials. Some rural areas might not have power restored for more than a week.

In addition to the extensive wind damage and flooding, there were 10 confirmed breached dams, according to the S.C. Department of Health and Environmental Control. Rainfall varied per region, drenching Horry and Marion counties with up to 14 inches of rain, while dropping as little as 3-5 inches on counties that lay to the southwest.

Not all news was bad. Unlike last year, when it continued to rain for weeks after the main event, this year’s storm was followed immediately by sunny skies and cool breezes, giving some crops still in the fields a chance to survive. Also, flood waters in most areas have receded much faster in 2016 than they did in 2015.

Clemson Cooperative Extension, in collaboration with other state agencies, has been working to provide farmers with information and assistance. Here are a few updates from Clemson University experts located around the state. 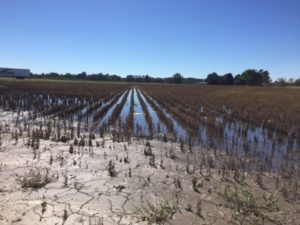 JOHN MUELLER / Director of Edisto Research and Education Center in Barnwell County: This southwestern county and its surrounding areas took less of a hit than the southeastern and northeastern portions of the state. But large fields of cotton – many of which had already been defoliated – were severely damaged by heavy winds. Some fields of peanuts will be okay, but others that were heavily flooded will be lost due to rot. A lot of soybeans were also knocked over by the winds, which will lead to a reduction in yield.

“I think the bottom line is that damage will vary field by field, that we were slightly ahead of last year’s pace in terms of harvest and that the post-flood weather this time is much better than last time,” Mueller said. “But there is a lot of infrastructure down that will interfere with the recovery process.”

CHARLES DAVIS / Extension agent and agronomic crops expert based in Calhoun and Richland counties: Cotton that had not yet been defoliated has been wind-whipped 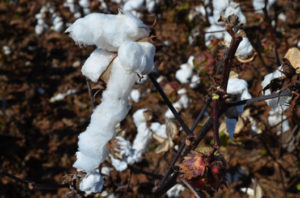 but remains viable. “Storm fastness” is one of the selling points of many new cotton varieties, according to Davis, and this year would have been “a good one to pay attention to this attribute.” Cotton that was already defoliated has suffered considerable loss. Peanut growers rushed to harvest their crops before the storm struck, but there is still a fair amount that have already been dug up but not yet harvested. These are lying on the ground and are in danger of rot. Soybeans fared pretty well. Their leaves were beaten up, but most of the pods remained intact.

“As far as cotton, peanuts and soybeans go, it’s really varied,” Davis said. “I’ve talked to a number of farmers and some say their damage isn’t too bad, while others say it’s terrible. It’s not like last year’s flood, where it just kept raining and raining and raining. So we’ve dodged that bullet, which gives hope that at least some of the crops still in the fields will survive.”

DAVID DEWITT / Extension agent and agronomic crops expert based in Kershaw, Lee and Sumter counties: These counties took less of a hit than some, especially in terms of rainfall, with some areas receiving less than 5 inches. But toppled trees blocked roads and tore up power lines. Also, most of the cotton had already been defoliated and ready to pick and it’s now lying on the ground, which will make harvest difficult. Peanuts seemed to take less of a beating and, for the most part, might do relatively well.

“We’ve had a few gorgeous days of sunshine and cool breezes that are going to help crops mend themselves a little bit,” DeWitt said. “Last year, the sun didn’t come out until November. But the past two days this year have been beautiful. It’s just going to take a long time to restore power to everybody, especially in the rural areas.” 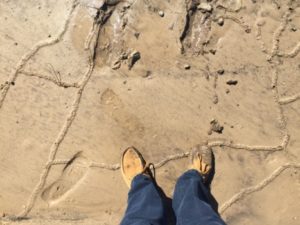 HANNAH MIKELL / Extension agent and agronomic crops expert based in Clarendon County: The county was fortunate to have had plenty of rain on the cotton crop in the weeks leading up to the storm and most of the crop was better than average. The good news is that most cotton farmers had not yet defoliated, but the wind and rain caused the plants to wrap up and lie down, which will create a mess at harvest time leading to lesser quality and lower yields. The majority of the Virginia peanuts and the early soybeans had already been harvested before the storm arrived. However, a lot of runner peanuts are still in the fields and remain at risk of deterioration over the coming days. The storm caught the sweet potatoes in mid-harvest, which are now in danger of taking on too much water, creating the potential for splitting, bursting or rotting.

“I talked to a farmer who guessed that commodities statewide will see significant losses, but it’s still wait-and-see,” Mikell said. “If we can get enough dry, sunny weather, then some of the crops still in the fields can be saved.” 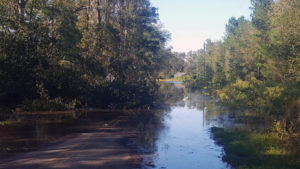 TONY MELTON / Senior Extension associate based in Florence County: The rain fell much faster this year than it did during last year’s storm, which was spread over several days. Fall vegetables such as turnips, brassicas, collards and spinach were massacred by the deluge. Hundreds of acres were destroyed.

“A lot of it is totally devastated,” Melton said. “Vegetables just do not like wet feet. Spinach is especially vulnerable. It will take days to get most of the water out of the fields. Yet it only takes about half a day to kill these sensitive vegetable crops. It’s just a pretty tough situation. I was here when Hurricane Hugo hit and I think Hurricane Matthew turned out to be much worse.”

WILLIAM HARDEE / Extension agent and agronomic crops expert based in Horry and Marion counties: In terms of rain and flooding, these two counties were probably the hardest hit in South Carolina. Structures such as greenhouses and sheds were blown away and some roads were destroyed. Cotton, peanuts and soybeans all took big hits.

“The actual flooding this year was worse than we had last year, but at least it receded a lot quicker this time,” Hardee said. “Last year at my house, the water got halfway up the yard, but it stayed there for a couple of days. This year, it got all the way to my front doorstep, but the next day it was gone. Luckily, it got out of Dodge pretty quick. But we took a serious beating when the storm was on top of us, and most of the damage it caused can’t be undone.”