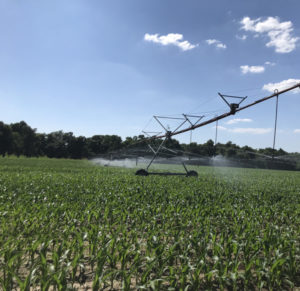 Growing season is in full swing and farmers must pay close attention to the water needs of several crops at this stage, says a Clemson University specialist.

Michael Plumblee, Clemson Extension precision agriculture specialist who also is an Agronomic Crops Team and Water Resources Team member housed at the Edisto Research and Education Center, said that until recently, several places around the state have experienced timely rainfall. But some areas are drying up.

“Some areas, especially in the Pee Dee region, have experienced excessive rainfall that affected planting, replants and field work over the last few months,” Plumblee said. “Throughout the state, certain areas are beginning to become dry and run out of moisture. Several irrigation systems have been running to maintain crop yield potential.”

Information from the South Carolina Department of Agriculture shows corn, cotton, peanuts and soybeans are the state’s major row crops. Plumblee said these crops can benefit from supplemental irrigation in the absence of rain.

“Statewide, the majority our corn crop seems to be on track to produce good yield,” Plumblee said. “However, it is important growers remember to use irrigation, if available, to finish out their crops as needed.”

Corn’s peak water use is around tasseling to R1 (silking) growth stage using 0.3 inches of water per day. After this point, water use begins to decline but is still needed until corn reaches maturity. Reports from the U.S. Department of Agriculture National Agricultural Statistics Service show 92% of South Carolina corn was silking as of July 19.

A majority of cotton in South Carolina was planted later than normal. Depending on the weather, cotton planting usually begins in late April and continues through May in the state. Michael Jones, Clemson Extension cotton specialist housed at the Pee Dee REC, said wet, cold conditions in early May set back planting. USDA reports show 69% of the state’s cotton crop was squaring and 14% was setting bolls as of July 19.

“As we transition into bloom and reproductive growth, water use in cotton is increasing rapidly,” Plumblee said. “To maximize yield, it is important growers make sure adequate soil moisture is available to plants going into and throughout bloom and boll fill.”

As crops transition into reproductive growth (bloom) stage, water use begins to increase rapidly. At the beginning of bloom, cotton, peanut and soybean crops use approximately 0.2 to 0.25 inches of water per day. In the absence of rainfall, roughly 1 inch of irrigation should be applied every four days to replace losses that occur due to evapotranspiration, or the loss of moisture caused by evaporation of water from the soil and transpiration from plants.

Water use continues to increase until peak bloom in cotton and peanuts and the R2-R3 (from full bloom to beginning of pod development) growth stage in soybeans.

Depending on which type of sensor a producer may be using, threshold values or threshold units may vary. Typical recommendations place threshold values between 25% and 50% maximum allowable depletion, which means 25% to 50% of water available to plants in the soil is allowed to deplete before recharging with irrigation.

Ongoing research being conducted at the Edisto REC using soil tension sensors and funded by the S.C. Water Resources Institute suggests a weighted average threshold of -30 kPa (cbar) in the top 24 inches of soil may provide the best net return for growers in cotton where soil moisture sensors are being used. Additional research is being conducted this year to refine season-long thresholds in soybeans.