Arriving during a time of transition in Washington, D.C., California Farm Bureau Federation directors met with congressional leaders, a Trump transition official and others involved in driving and monitoring the changing political landscape.

During a two-day series of meetings in the nation’s capital, CFBF leaders conferred with members and staff at more than two-dozen California congressional offices, updating them on issues including water, immigration, trade, farm policy and more. 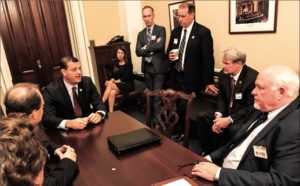 “Our key issues often remain constant, but our approach to resolving them has to change to reflect new circumstances,” CFBF President Paul Wenger says. “Certainly, circumstances in Washington have changed. This trip to Capitol Hill gave us a chance to gain information firsthand about how the new Congress and administration may approach these issues, and how Farm Bureau can be most effective in making our case for our members.”
More Reservoirs Needed

Another key change in recent weeks has come from the weather, which has doused California with a series of storms that have swelled existing reservoirs—and brought increased attention to the need for additional reservoirs to capture water in wet winters.

The storms followed on the heels of congressional passage of the Water Infrastructure Improvements for the Nation Act; among its provisions, the WIIN Act allows water agencies to capture more California water during winter storms and requires them to maximize water supplies, consistent with law.

Farm Bureau leaders say the WIIN Act has allowed a large volume of additional water to be captured in California reservoirs so far this winter.

Sen. Dianne Feinstein, D-Calif., who carried the California drought provisions in the Senate version of the WIIN Act, told Farm Bureau directors the bill’s passage was “the biggest political fight of my life,” and said she remains concerned about the amount of water that can’t be captured during current winter storms.

CFBF says additional congressional action will be needed to build upon the short-term provisions included in the WIIN Act, and has endorsed legislation by Rep. David Valadao, R-Hanford, that would add long-term stability to the water system.
Known as the GROW Act, for Gaining Responsibility on Water, the Valadao bill would aid in construction of water-storage projects and enact additional reforms of regulations that limit water deliveries.

Create A Visa Program
On immigration policy—with Congress and the administration seemingly focused on enforcement—Farm Bureau leaders urged congressional representatives to create a visa program for the entry of a foreign, legal workforce for farms and ranches.

Experts estimate 70 percent or more of hired farm employees in the U.S. are not authorized to work in the country, even though they present seemingly genuine documents to prove employment eligibility.

“For a long time, California farmers and ranchers have been unable to find American-born employees who are willing and able to work on farms,” Wenger says. “At the same time, improved opportunities in Mexico have reduced the incentive for people to migrate north looking for work. We have to make it easier for people to come into the U.S. to take on-farm jobs—and then to return to their home countries.”

He says Farm Bureau would continue to press for a visa program that would efficiently admit a sufficient number of willing and able agricultural workers.

“These are jobs that create economic activity through rural America,” Wenger says, “and we want to be able to offer those jobs to the people who seek them. Otherwise, the jobs and the economic boost they bring will likely drain away to other countries.”

Trade Negotiations
Trade policy has been pushed to the forefront in recent weeks, as President Trump withdrew the U.S. from the Trans-Pacific Partnership trade agreement and has raised the possibility of changes to the North American Free Trade Agreement with Canada and Mexico.

Noting that California exports more agricultural products than any other state, Farm Bureau leaders said they would ask the administration to pursue negotiations with individual TPP member nations—starting with Japan, which imposes crippling tariffs on key California exports such as wine, beef, rice, citrus and tree nuts.

“Once the administration’s full trade team is in place, we will also ask them to go slowly in re-evaluating NAFTA,” Wenger says. “Rather than reopening the agricultural chapters of the agreement, we’d prefer pursuing changes through existing provisions of the agreement itself.”

Farm Bill Discussions
Congress is expected to begin discussions this year on a new version of the Farm Bill, which includes federal farm and nutrition programs.

Klippenstein described Perdue as an effective advocate who “won’t be bashful” in pursuing agricultural priorities in Washington.

The Farm Bureau leaders also heard a description of public-opinion research techniques from Kyle Dropp, co-founder of the media and research firm Morning Consult, and met with a half-dozen reporters and editors at the offices of Politico, an online and print publisher specializing in news about politics and policy.

Dave Kranz is editor of Ag Alert. He may be contacted at dkranz@cfbf.com. The California Farm Bureau Federation contributed this article.