As a general rule with a subsurface drip irrigation (SDI) system, a cotton farmer can average 4 bales of lint per acre with 4 gallons of water per-minute per-acre irrigation capacity, according to Craig Hoelscher, Eco-Drip vice president of operations. In 2016, Braden Cunningham surmounted this rule of thumb by producing 2,290 pounds of lint per acre on his highest-yielding SDI field planted to FiberMax FM 1830GLT in Harmon County, Okla.

“By combining drip irrigation with no-till practices, Braden has the ability to maximize the efficiency of his resources, whether it’s rainfall, irrigation or fertilizer application. To produce 2,290 pounds of lint per acre from 12.5 inches of in-season rainfall and 9.5 inches of SDI irrigation is a remarkable achievement. It’s also a testament to efficiency and his approach to conservation while still maintaining top-end yields,” says McLain Pool, Eco-Drip regional manager for Oklahoma and the Texas Panhandle.

In recognition of this accomplishment, Braden is the 2016 recipient of the Water Conservation and Profitability Award sponsored by Eco-Drip and Cotton Farming magazine.

“This award was established to highlight cotton producers who believe conservation is the key to profitability and take a systems approach to using SDI as a conservation tool as well as an irrigation system,” Hoelscher says.
After graduating from the University of Oklahoma and working for a Dallas, Texas, oil and gas company, Braden came home to Hollis, Okla., to take over his grandparents’ land.

“Out of 920 acres, 180 acres were ready to farm,” he says. “The rest of the land had a barebones infrastructure, a herd of mama cows and hot fences all around it. In 2011, we sold the cows, got rid of the fences and were about to make a crop when the drought hit and continued for the next three years.

“During that time, I still had a deep passion in my heart for growing cotton and enjoyed the support of my wife, Raegan, who has been instrumental in my success. And once the rain returned, we were able to expand our operation and make good crops.” 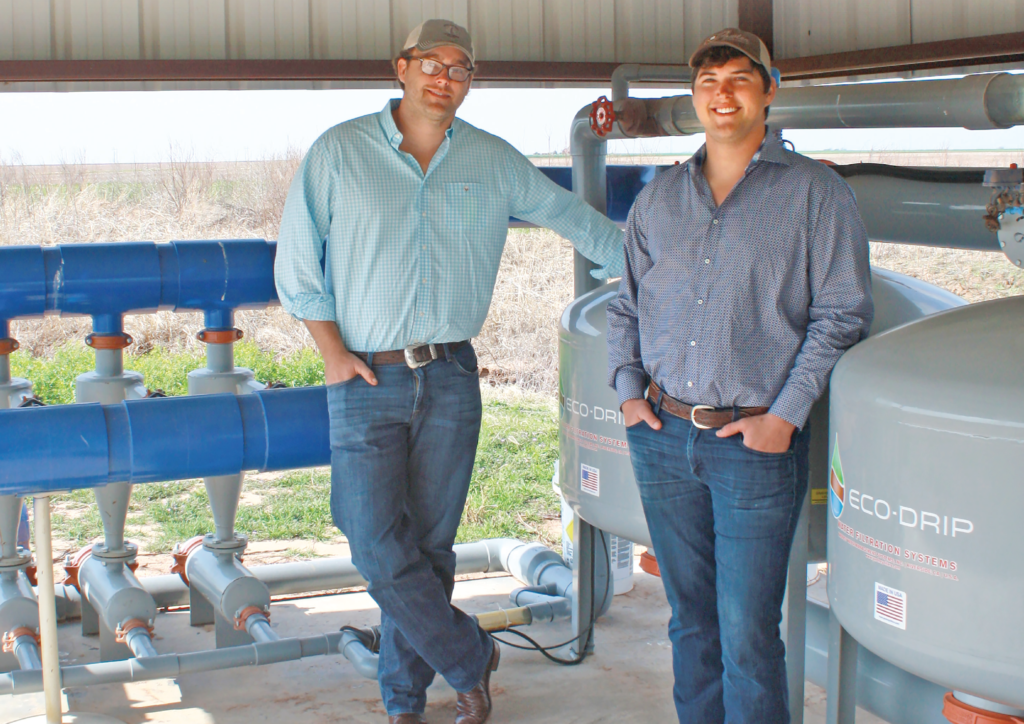 Oklahoma cotton farmers Braden Cunningham, left, and his brother, Connor, say their subsurface drip irrigation system helps get the most value from their inputs and promotes conservation.

“Last year’s crop was my first year with subsurface drip irrigation on a 160 acres,” Braden says. “I’m on 40-inch rows, and each piece of underground tape services one row of cotton. The tape is placed 16 inches below the soil, and emitters push the irrigation water up to the surface. Although sun is essential for plant growth, when it comes to irrigating, it is your biggest foe in terms of evapotranspiration. By installing underground tape in the drip irrigation system, water doesn’t evaporate. That’s one of the biggest benefits of SDI that I have seen.”

Another advantage Braden has noticed involves his fertilizer applications. “We run nitrogen, phosphorous, potassium, zinc and all the micronutrients through the SDI system,” he says. “All the nutrients trickle down directly to the roots without being exposed to the sun, so the plant gets everything we feed it.”

Last year, no pre-watering was necessary on the farm because the soil moisture profile was adequate at planting. After 13 inches of rain in June, very little fell in July and August.

“We do our best to avoid any stress on the plants, so we watered pretty hard during those months,” Braden says. “We pay close attention to extended weather forecasts and try to stay ahead of dry spells, especially during bloom.”

Conservation Strategy Includes Cover Crops
Conservation is an important aspect of the operation “because we, as farmers, love the land,” Braden says. “The two most important inputs are irrigation and fertilizer. By applying them underground through SDI, they are protected from the evaporative nature of sunlight, which translates to huge strides in conservation and efficiency. This approach also has a positive impact on yield potential with our modern genetics.”

Another conservation method Braden uses is planting a wheat cover crop to shade the ground, maintain moisture and keep dirt from blowing away during the windy months of March and April. This year he planted a mixed cover crop of radishes, turnips and rye grass on some fields to see if it added extra nitrogen to the soil. “We want to do what’s best for the land in terms of conservation,” Braden says. “We want to build it up and make it better for the next generation.”

Input Timing Is Key To Success
Last year, Braden planted FiberMax FM 1830GLT on the SDI field that yielded 2,290 pounds of lint per acre.
“A lot of farmers have made this much cotton before,” he says. “We were excited to have made it for a little more than $300 per acre in direct inputs, such as seed cost, fertilizer, insect and weed control. To maintain a low budget and maximize yields, we focus on the timing of everything.

“We apply phosphorus and potassium preplant and then feed the cotton micronutrients and 154 units of nitrogen per acre the first two weeks of bloom. As far as weed control, it’s important to start clean and stay clean. We have to keep carelessweed (Palmer amaranth) out of the crop, especially during the first month and a half that the seed is in the ground. To maximize yield, we also control fleahoppers early in the season to retain the early fruit. That’s where the money bolls are.”

Braden says he is eager to add more subsurface drip irrigation and has signed up 600 acres in an Environmental Quality Incentive Program (EQIP). “The government will help pay to replace flood-irrigated cotton with an SDI system,” he says. “If we receive funding, we can have additional acres of SDI this season. The total time for Eco-Drip technicians to install the SDI system on a 120-acre field is typically two weeks from start to finish. I want to add as much drip irrigation as possible to get the most value from our inputs and promote conservation.”

It is with much pleasure that we congratulate Braden Cunningham as the recipient of the 2016 Water Conservation and Profitability Award. 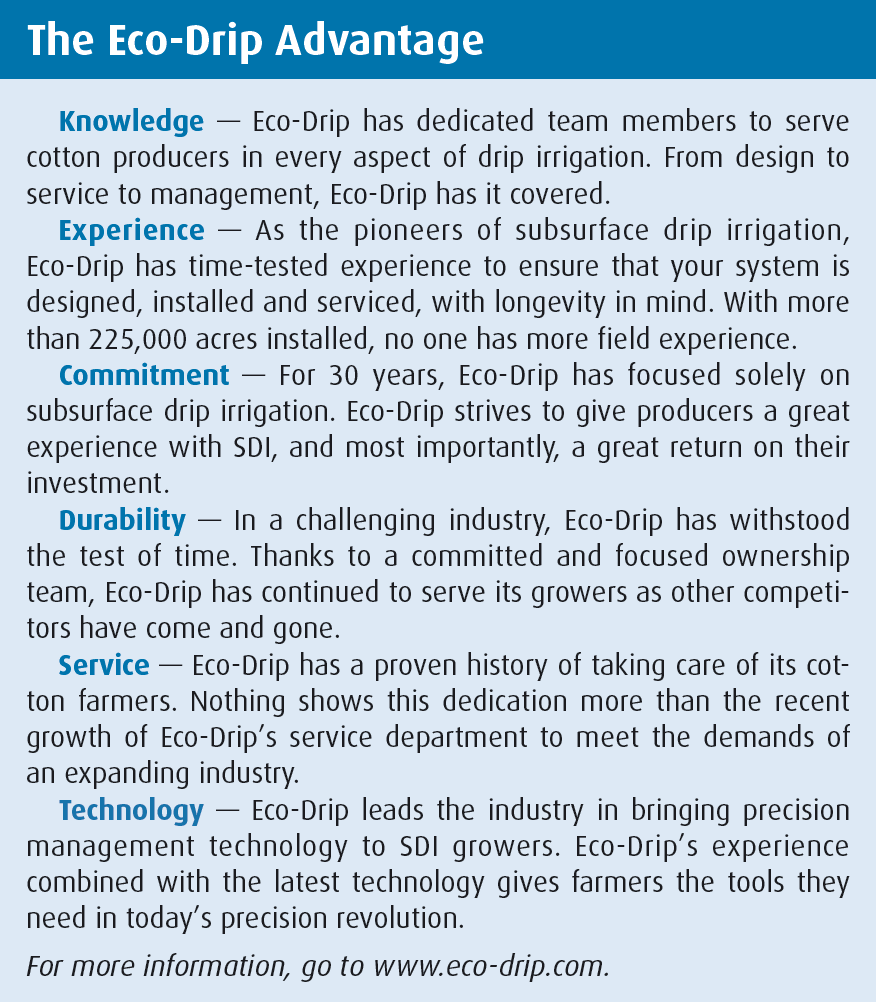