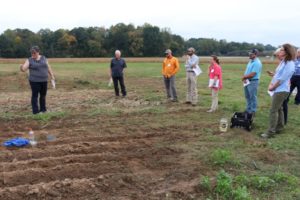 Healthy crops begin with healthy soil and researchers with the Clemson University’s Sustainable Agriculture Research and Education program are teaching farmers how they can benefit from keeping their soils fit.

The researchers teamed up with other agricultural professionals and farmers who have implemented soil health principles by using cover crops, no-till and livestock integration to hold a conference to teach about soil health and tools to use to promote healthy soil.

“Soil is one of the most precious resources we have,” said Geoff Zehnder, Clemson SARE coordinator and co-organizer. “We depend on soil for our livelihoods and we must learn how to keep soil healthy so that it will continue to work for us.”

Co-organizers with Zehnder for the “Building Soil Health: Principles, Practices and Productivity “conference were Kelly Flynn with the Clemson Emerging Crops Program and Buz Kloot with the Arnold School of Public Health at the University of South Carolina.

Many people may take soil for granted and think of it as a renewable resource that will always be around. However, worldwide, topsoil has been lost in the past 150 years and is being lost at rates 10 to 40 times faster than it naturally can be replenished.

Currently, 40% of soil used for agriculture throughout the world is classified as degraded or seriously degraded. Gail Fuller is a third-generation farmer from Emporia, Kansas, who spoke about how cover crops can help replenish the soil.

“George Washington and Thomas Jefferson used cover crops to replenish the soil after a harvest,” Fuller said. “In the 1800s, cover crops were known as ‘green manure’ and were widely used to enrich the earth and put nutrients back in the soil. Why did we ever get away from using cover crops?”

Availability of synthetic fertilizers and a lack of understanding of the role of organic matter in soil health are two possible reasons why cover cropping practices have declined in modern agriculture. Also, successful implementation of cover cropping requires some knowledge and experience. But creative management can help overcome some of these issues, Fuller said.

“Consider the main crops being grown and then determine which cover crops can be grown so that they won’t interfere with harvest and will still have a head start when going into winter,” he said.

Fuller said he has learned planting cover crops is a way to increase profits and nutrient cycling, as well as capture solar energy.

“I had read about it and was interested in using cover crops as a nitrogen source,” Carter said. “Since we’ve started growing cover crops, we’ve cut back on fertilizer inputs, but are seeing the same yields. We’re saving money because our fertilizer costs are lower and yields are remaining the same.”

“We, too, have lowered input costs by growing cover crops,” Dueck said. “We’re also seeing an increase in nutrients in our silage.”

Use no-till with other conservation practices

“Soil must be able to function as a vital living ecosystem including nutrient cycling, as well as water infiltration and availability,” Lowder said. “Soil also must be physically stable and able to support plant growth. No-till cropland can do this if diverse cover crops are grown.”

“We had been using no-till on our crops, but didn’t see any real soil health benefits until we started growing cover crops,” Newton said. “Growing cover crops has allowed us to cut our input costs, without lowering our yields. If we can cut costs and stay in business and it’s good for us, we’ll continue to grow cover crops.”

While reducing tillage may help, Kris Nichols, soil microbiologist with a soil health consulting firm, said using a systems approach which begins with optimizing plant photosynthesis and soil organic matter is most beneficial.

“We need to bank more carbon in the soils,” Nichols said. “To do this, we need to keep a diversity of plants, including cover crops, growing in our soils. Diversifying crops is good for the climate and good for farmers’ wallets.”

In addition, carbon in the form of plant organic matter in the soil is essential food for soil microorganisms that perform many benefits in agriculture including making nutrients in the soil more available to plants.

David Kinder is a Royston, Georgia farmer who attended the conference. Kinder grows corn, soybeans and wheat. For diversity, he also raises chickens. Prior to growing row crops and raising chickens, Kinder was a dairy farmer.

“I’ve learned it’s important to learn about new practices and evolve with the times,” Kinder said. “You need to evolve, or get left behind.”