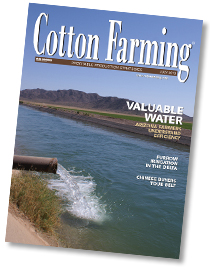 A project taking place in Georgia’s Flint River Basin combines proven technology and high-tech solutions to integrate and automate irrigation scheduling, eventually putting it all in the palm of the producer’s hand.

The goal of the Flint Irrigation Scheduling Tool (FIST), which has many partners including the University of Georgia, the Flint River Soil and Water Conservation District, USDA’s Natural Resources Conservation Service and the Agricultural Research Service and even IBM and The Nature Conservancy, is to provide producers in the Lower Flint River Basin with anirrigation scheduling tool that optimizes the use of water and conserves water.

All producers know how valuable water is to their livelihoods, but producers in the Flint River Basin also know that it is scarce. Conserving water and using it as efficiently as possible is critical to continuing to have it available.

“Water is expensive, therefore it must be used as efficiently as possible,” says John Snider, UGA cotton physiologist. “Efficiency can be increased through improving irrigation management with the use of scheduling and by utilizing drought-tolerant, water-use efficient cultivars.” 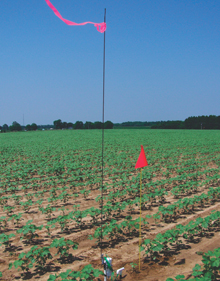 George Vellidis, UGA professor in Crop and Soil Sciences, and one of the scientists working on the FIST project, says, “We are developing this tool for the Flint River Basin for use in all crops, but it is expected to become available for all producers eventually.

“The FIST project will harness proven technology that is already tried-and-true.”

The UGA Smart Sensor Array is a system of wireless soil moisture nodes. A node is defined as the combination of electronics and sensors installed at each location in the field, and it consists of a circuit board, a radio frequency (RF) transmitter, soil moisture sensors and temperature sensors. Each sensor node accommodates up to three Watermark soil moisture sensors and two thermocouples for measuring temperature. According to Vellidis, this low cost system allows a user to install a dense network of sensors toaccurately assess soil moisture variability, which is the type of information necessary to make good irrigation scheduling decisions.

“The low-profile sensor attached to a flexible antenna allows farm vehicles to drive right over it,” he says. “Other types have a rigid presence in the field.”

“Variable rate allows you to turn off areas that you don’t want to apply irrigation to,” he says.

In Vellidis’ example, on one full pivot the VRI map showed that nearly 30 acres should not be irrigated, which is a considerable savings to the producer on just one irrigation event. Soil moisture sensors show where irrigation is going and how effective it is.

Vellidis says, in 2013, they installed VRI in 10 producers’ fields in the Flint River Basin, which also included the soil moisture sensor systems in those fields. A portion to be completed soon includes the Internet-baseddelivery of information.

“Eventually, the producer will log on to the Web interface and see what soil moisture sensors are doing throughout the field and then get an irrigation recommendation for each one of the management zones,” he says.

According to Vellidis, the next steps for this project are to complete FIST and use it to schedule irrigation in the 10 demonstration fields in 2013. They will validate crop responses in the field, automate the downloading of the VRI map to the pivot controller and convert the Web-based portion into a smart phone app. Finally, they plan to add drought adaptation strategies to FIST.