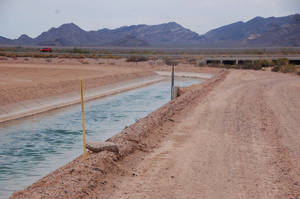 No region of the Cotton Belt is immune to water issues affecting producers and their urban neighbors. From California to the Carolinas, the ongoing challenge is to find available water that can keep all parties happy.

This is becoming even more of a major test in Arizona where the interests of farmers are pitted against growing urban populations, Indian tribes and overextended water sources such as the Colorado River.

And let’s not forget a drought in Arizona that has been going on for more than 10 years. All of these factors are combining to create a difficult scenario for the state’s cotton farmers.

True, the seven river basins connected to the Colorado River now have agreements on allotments that began in 2003 followed by more guidelines in 2007. But the situation has become contentious in many circles, and Arizona farmers are trying to find workable compromises with other non-ag groups that want equal access to water.

Why is there such a sense of urgency? According to a recent comment from Michael Connor, commissioner of the Bureau of Reclamation, “there is a significant chance of declaring a shortage in the Colorado River basin in 2016.”

Research data also points to the fourth-driest year (2013) in the basin over the past 100 years. More specifically, the river’s largest reservoirs – Lake Mead near Las Vegas and Lake Powell near Page, Ariz., are projected to drop to 45 percent capacity by September.

Arizona producer David Wuertz of Coolidge, whose farm consists of 3,000 acres of cotton, alfalfa, hay, wheat and barley in the central part of the state, says it was easy to predict the current water crisis.

“I think this is a microcosm for other areas in the country where rural and urban areas share water sources,” he says. “We have a limited supply of water here in Arizona and a growing population that will try to keep taking water away from agriculture. That’s the story in a nutshell.”

Wuertz is surrounded by three water districts that use Central Arizona Project (CAP) water from the Colorado River. He still purchases 80,000 acre-feet of CAP water, and there are 27,000 acres in his district. If he needs additional water, he has to go to his wells.

So what is a farmer supposed to do to gain access to water after he has exhausted all other options? In Wuertz’s case, he is implementing a subsurface drip system and so are many of his neighbors. This appears to be his best choice for “making every drop of water go a little farther.”

Wuertz admits that the scenario has changed since his father (Howard Wuertz) was farming in the 1970s and 1980s. In those days, the main groups needing water were the cities, Indian tribes, mines and agriculture. Now, according to David, the environmentalists are part of the equation, and the urban populations have increased in size.

“It seems like everybody has a straw in the bucket,” he says.

Wuertz returned to work on the family farm in 1985, and he is confident that a workable compromise can occur among all groups wanting more water from the districts connected to the Colorado River Basin.

Most ag officials will admit that it’s better to find a mutually acceptable agreement on water issues than enter into lawsuits that can drag on for years before a settlement is reached.

As constructive as that statement sounds, the flip side of the equation is that when it’s a choice of delivering water to expanding urban populations versus farmland, the cities and suburbs usually win out. However, as Wuertz points out, farmers in his area continue to receive their allocation. The only restrictions occur when the Colorado River is over-allocated, forcing farmers to pump water.

“There is no question that the river is over-allocated,” says Wuertz. “There are more users than ever before, and more demands on it than available water. The numbers are frightening.”

As for the immediate outlook for agriculture in Wuertz’s region, it may come down to how well farmers can embrace conservation and irrigation.

“We must have a viable ag community here in Arizona,” says Wuertz. “It’s not going to be easy, but we have to keep being as efficient as possible.”

Producers in southeastern Arizona face a similar scenario. Lance Layton farms near Thatcher and relies on the Gila River for his main water allocation. He has about 1,400 total acres with 1,300 acres devoted to cotton. The rest is planted to various grain crops.

Most of the necessary water from the Gila is connected to a good snowpack level to the north. On average, this part of Arizona receives nine inches of rainfall every year.

Because of the state’s 10-year drought, the snowpack level hasn’t been nearly enough to have a positive effect on water allocation levels on the Gila. Compounding the situation for Layton is the fact that farmers in his region have an agreement with a local Indian tribe and are only allowed to use six acre-feet of water on their cotton fields.

“Our situation is such that we need to find common ground with the Indians,” says Layton. “Farmers in the region are required to abide by a water settlement with local Indian tribes placing a restriction on the amount of water that can be diverted from the river and pumped from our wells.”

In the final analysis, it all comes down to Arizona farmers wanting to do whatever it takes to protect water and maintain agriculture in their region.

“We have implemented changes in our practice of farming to conserve water for the past 50-plus years,” says Layton. “Ultimately, it would be great to see policies change to help in other ways, such as allowing us to clean the foreign phreatophytes from the river, to help flow and quality of its water, or help fairly settle ongoing litigation, which costs irrigation districts hundreds of thousands of dollars.

“More and more non-regulated food and fiber is coming from other countries. We are just striving to keep some of the safest, highest quality food and fiber here at home to sustain and protect our families.”

Arizona Extension cotton specialist Randy Norton has worked with David Wuertz and Lance Layton for many years. He says their attitude toward adopting new technology is one of the reasons why he is optimistic about his state’s cotton farmers surviving the current water crisis.

“Regardless of whether we are talking about subsurface drip irrigation, land leveling or other techniques, our farmers are doing everything they can to increase efficiencies for water usage,” says Norton.

What makes states in the West (California, Arizona and New Mexico) different from the rest of the Belt is the role irrigation plays in cotton production. In other regions, irrigation is viewed as a supplemental water practice. In the West, Norton says it is more of a “lifeline.”

“There is no way we could depend on rain to grow a crop,” he says. “We depend on rain during the off-season to provide enough moisture to grow our crops during the summer. We have to conserve our resources and use them efficiently.”