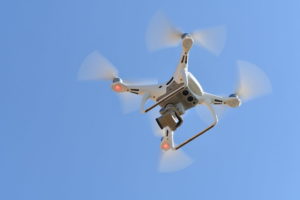 A lawsuit recently filed in the United States District Court for the Western District of Texas challenges the constitutionality of the Texas “Use of Unmanned Aircraft” statute.

Back in 2013, the Texas Legislature passed the “Use of Unmanned Aircraft” statute. This legislation sought to address various issues related to the use of drones.

Initially, statute lists out numerous lawful uses of drones. This portion of the statute is not challenged in the lawsuit.

Next, the statute states that certain uses of drones are illegal.

First, the use of a drone to capture an image of an individual or privately owned real property in Texas with “the intent to conduct surveillance” on the individual or property captured in the image. See Texas Government Code Section 423.003. Further, possessing, disclosing, displaying, distributing, or otherwise using an image so captured is an offense as well. See Texas Government Code Section 423.004. Both offenses are misdemeanors. Monetary damages may also be sought through civil court.

Additionally, oil and gas drilling sites, tank batteries, production facilities, wellhead, and any facility with an active flare is included if such facilities are fenced or have another type of physical barrier. See Texas Government Code Section 423.0045.

Specifically, a person commits an offense if they intentionally or knowingly: operate a drone over one of these facilities at a height below 400 feet above ground; or allow a drone to make contact with a facility including a person or object on the facility; or allow the drone to come within a distance close enough to interfere with the operations or cause a disturbance to the facility.

See Texas Government Code Section 423.0045. Keep in mind that federal statute requires all drones to be flown below 400 feet high, meaning that practically speaking, this statute prohibits flying a drone over these facilities at all. Violations can be either a Class A or B misdemeanor.

Lastly, the statute prohibits the operation of unmanned aircraft over a “sports venue,” which is defined as an arena, automobile racetrack, coliseum, stadium, or other type of area or facility that has seating capacity over 30,000 and is primarily used for one or more professional or amateur sports or athletic events.

A person commits an offense if they knowingly or intentionally operate the drone over a sport venue lower than 400′ above ground. See Texas Government Code Section 423.0046. Again, keep in mind that FAA regulations prohibit flying above 400′ high, which essentially disallows drone flying over a sports facility. However, there are certain exceptions that do allow flying under the following circumstances: the drone is operated by the government or person under contract with the government; the drone is operated by a law enforcement agency or person under contract with a law enforcement agency; the operator is being used for a commercial purpose and is conducted in compliance with FAA regulations and authorizations; the drone is operated by the owner of the venue, acting on the owner’s behalf, or acting with the owner’s written permission.

The National Press Photographers Association, Teas Press Association and Joseph Pappalardo filed suit in federal court challenging the constitutionality of the law. [Read complaint here.] The plaintiffs claim that the provisions “chill and criminalize speech and news gathering activity protected by the First and Fourteenth Amendments.”

With regard to the statutory provisions related to surveillance on private property, the lawsuit claims this violates the First Amendment because it regulates speech based on content without a compelling governmental need that the statute is narrowly tailored to address.

Additionally, they allege a violation based on prohibition of speech based on the identity of a speaker without a compelling governmental need that the statute is narrowly tailored to address. By allowing certain drone uses such as police and academia, for example, yet prohibiting surveillance over private property, the statute is content based, argues the complaint.

The complaint also claims that the surveillance provisions are overly broad, thus violating the First Amendment in that way as well. They claim that by prohibiting “surveillance” but not defining that term, it may prohibit protected activities such as news gathering. Along these same lines, the complaint alleges the statute is unconstitutionally vague due to the lack of definition because and ordinary person could not know what activity was permitted versus prohibited as “surveillance.”

With regard to the provisions related to critical infrastructure and sport venues, the plaintiffs argue this violates the First Amendment by singling out journalists and prohibiting news gathering, while allowing commercial and governmental use of drones. This “discriminatory treatment of the press burdens news gathering activities protected by the First Amendment” and the State has not articulated a compelling reason for doing so, argue the plaintiffs. They also claim the use of the term “commercial purpose” for which flying is allowed is over broad and unconstitutionally vague as it could be interpreted in arbitrary and discriminatory ways absent a statutory definition.

Additionally, plaintiffs allege a supremacy clause violation–the argument being that the federal government should have exclusive authority over regulating the national airspace and the state should not be allowed to regulate related to safety (although they admit the state does have the ability to regulate related to privacy, trespass, and voyeurism).

The complaint requests the court to declare these portions of the statute unconstitutional, enjoin Texas from enforcing the statute and award attorney’s fees and costs.

Tiffany Dowell Lashmet is an associate professor and Extension specialist in agricultural law with Texas A&M Agrilife Extension. She may be reached at tdowell@tamu.edu.