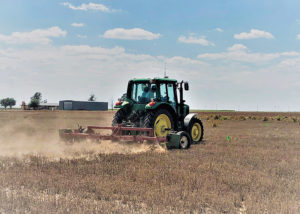 Can strategically timed tillage improve the efficiency of no-till farming in the semiarid region? That’s a question one researcher from the College of Agricultural, Consumer and Environmental Sciences at New Mexico State University is hoping to answer with a new study.

Rajan Ghimire, an agronomist and assistant professor based at the NMSU Agricultural Science Center in Clovis, initiated the study after hearing farmers express concerns about continuous no-tillage cropping.

“Farmers are asking: How much damage is done by occasional tillage in continuously no-tilled plots? Is there any room for mixing residue and soils, or any other benefit of strategically timed tillage in the continuous no-tillage system?” Ghimire says. “To address these questions, we established a study at our long-term tillage demonstration sites.”

Conventional tillage is common in eastern New Mexico and involves four to six passes of the moldboard plow, disk plow and cultivator/ripper, which, according to Ghimire, prepares a good seedbed for crops, but has several disadvantages.

He says repeated tillage damages soil structure, which causes rapid mineralization and soil erosion by both wind and water, and loss of soil organic matter and nutrients.

But no-tillage farming also has its challenges.

Dryland farmers in semiarid regions question the long-term sustainability of such a system because it increases dependence on herbicides for weed control. It also can result in the build-up of herbicide-resistant weed populations, the incidence of soil and stubble-borne diseases, and stratification of nutrients and organic matter in the topsoil. Farmers also experience difficulty due to compaction.

“In this new study,” Ghimire says, “we proposed strategically managed minimum tillage of continuous no-till plots to maximize the agronomic and ecological benefits by harnessing positive aspects of both tilled and no-tilled systems.”

In early September, Ghimire introduced stubble-mulch tillage to a demonstration plot. It was the first tillage on the site since 2013.

“We collected baseline soil data before tillage,” he says, “and we will continue to monitor changes in soil processes for several months after tillage.”

Ghimire will simultaneously monitor the long-term and no-tilled plots, as well as the adjacent conventionally tilled and strip-tilled plots. He plans to till the latter two plots every year and will wait four years to till the strategic-tillage plots. And, he will maintain the no-tillage plots with no disturbance for much of the study’s duration.

“We will be evaluating how changes occur in soil organic carbon, nutrient pools and dynamics; crop residue decomposition; microbial community composition; soil structure; and overall soil health and resilience,” he says, adding that he will collect samples at tillage depth and below tillage depth. “It is also crucial to understand long-term soil carbon sequestration and its relationship with crop yield and productivity.”

Ghimire will introduce another tillage treatment in the two no-tillage plots in 2021, after eight years of no-tillage.

“We are excited to know how strategically timed minimum tillage in the continuous no-tilled system will affect soil properties and long-term sustainability of dryland farming in eastern New Mexico, and semiarid Southwest.”